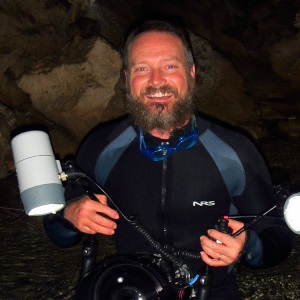 Danté Fenolio grew up in the fog-shrouded redwood forests of the Santa Cruz Mountains in California. Pacific Giant Salamanders and Red Legged Frogs were a regular part of his daily childhood experience. He has maintained and bred in captivity a variety of amphibian species, including endangered species like the Darwin's Frog, Rhinoderma darwinii, and the Malagasy Tomato Frog, Dyscophus antongilii, as well as species that previously had been infrequently bred, like the live bearing West African caecilian, Geotrypetes seraphini, and Leaf Frogs such as the Yellow-eyed Leaf Frog, Agalychnis annae, and the Amazonian Leaf Frog, Cruziohyla craspedopus.

With a combined undergraduate degree in Biology and Environmental Studies from the University of California at Santa Cruz, Fenolio earned a Masters degree in Zoology from the University of Oklahoma, where he examined the population ecology of Ozark Blind Cave Salamanders, Eurycea spelaea. Danté then earned a Ph.D. in Biology from the University of Miami, Florida, involving amphibian conservation and taxonomy. After graduate school, Fenolio worked for the Atlanta Botanical Garden, helping to coordinate both local and international amphibian conservation efforts and to develop captive breeding methods for endangered species. Perhaps the most significant project while with the Garden was the development of the Chilean Amphibian Conservation Center, in Santiago, Chile. The collaboration with the National Zoo of Chile works to develop captive assurance colonies of endangered Chilean amphibians and to monitor wild populations for emergent infectious disease – see www.savedarwinsfrogs.org

Danté now runs the Department of Conservation and Research for the San Antonio Zoo. Diverse conservation programs include: (1) continuation of work with endangered Chilean amphibians with the National Zoo of Chile in Santiago and with the Austral University of Chile, (2) work in China with endangered blind cave fish, collaborating with the Chinese Academy of Sciences, (3) work with the Georgia Department of Natural Resources to better document the range of the Georgia Blind Salamander, (4) work with the Oklahoma Department of Wildlife Conservation to continue 15 years of bioinventory work in the Ozarks documenting the diversity of subterranean wildlife there, (5) work with the US Fish and Wildlife Service to develop a captive colony of the critically endangered Reticulated Flatwoods Salamander, (6) a training program for indigenous Peruvians to develop skills (such as Japanese fish printing “gyotaku”) that provide revenue streams which do not rely on forest removal for income, and (7) development of a captive breeding program at the San Antonio Zoo for the Japanese Giant Salamander.