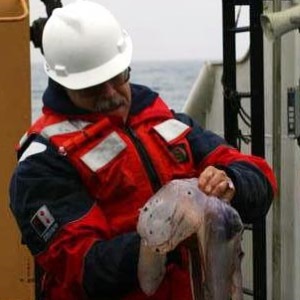 Born in a town called Neptune, Michael Vecchione went to sea as a cabin boy on a three-masted schooner in Maine at the age of 16. He completed undergraduate studies in biology at the University of Miami in 1972, and then spent four and a half years as a U.S. Army officer. He has been working on the biology, evolution, and life history of cephalopods (squids, octopods, and their relatives) since his graduate studies on planktonic molluscs during 1976-79 at the Virginia Institute of Marine Science (VIMS), the School of Marine Science for the College of William and Mary. After receiving the Ph.D degree there, he worked briefly for the U.S. Fish and Wildlife Service before accepting a faculty position at McNeese State University where he studied cephalopods, zooplankton, and ichthyoplankton in addition to teaching from 1981-86. In 1986 he moved to his present position as Cephalopod Biologist at the National Systematics Laboratory (NSL), a NOAA Fisheries lab located at the National Museum of Natural History (NMNH) where he is an Adjunct Scientist of the Smithsonian Institution. He was Director of the NSL for 18 years. Vecchione is Curator of cephalopods and pteropods at NMNH and a Curator of the Sant Ocean Hall. He also established and served from 2000-2002 as Director of a Cooperative Marine Education and Research program at VIMS, where he is an adjunct faculty member. He has participated in 40 offshore research expeditions, 13 of them as Chief Scientist. Vecchione is a Fellow of the American Association for the Advancement of Science and Past-President of the Cephalopod International Advisory Council. The latter awarded him a Career Achievement Award in 2018.