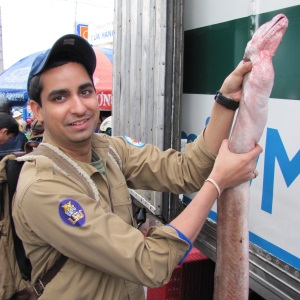 Dr. Chakrabarty is Curator of Fishes (since August, 2008) at Louisiana State University's Museum of Natural Science and is a systematist and an ichthyologist studying the evolution and biogeography of both freshwater and marine fishes. His work includes studies of Neotropical (Central and South America, Caribbean) and Indo-West Pacific (Indian and Western Pacific Ocean) fishes. Collecting efforts at LSU include local trips and international collecting trips to Japan, Australia, Taiwan, Honduras, Guatemala, Kuwait, and many other countries. He has described over a dozen new fish species including several anglerfish and cavefish taxa new to science. The LSU MNS includes over half a million fish specimens, and nearly 10,000 tissue samples covering most of the major groups of fishes. You can follow him on Twitter @LSU_FISH