Meet the Tiny Bacteria That Give Anglerfishes Their Spooky Glow

A close up profile of an adult anglerfish female from the Linophryne family collected in the northern region of the Gulf of Mexico. © 2016 DEEPEND/ Dante Fenolio

Descend two hundred meters (about 656 feet) below the surface and the ocean is reduced to total darkness. Creatures that live beyond the Twilight Zone spend their lives almost entirely in a near-limitless black expanse, save for a group of luminous fishes, invertebrates and bacteria that have evolved a special adaptation: bioluminescence.

Bioluminescence is the predominant source of light in the largest fraction of the habitable volume of the earth—the deep ocean. It’s thought that 90 percent of open ocean organisms produce light of some kind, and that this ability that has evolved many times. It serves a few predictable purposes, like possibly signaling to members of the same species or illuminating prey, along with some capricious ones like the ability to eject luminescent body parts in order to distract a predator. 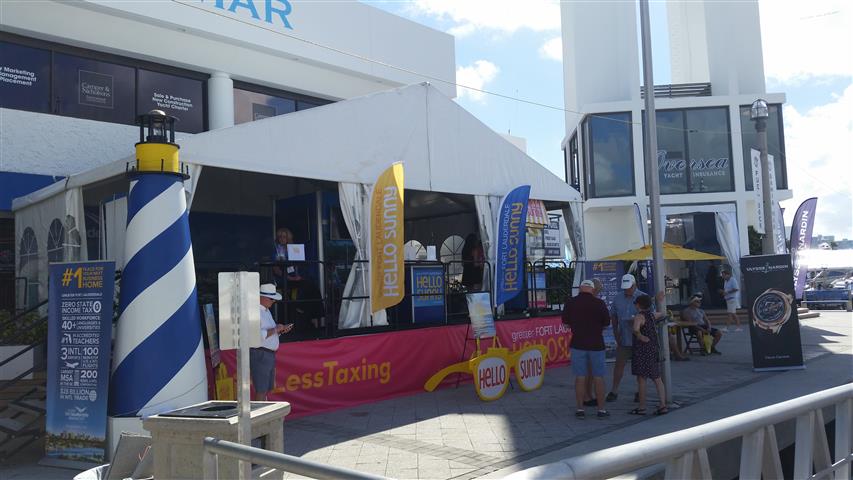 DEEPEND scientists will share information at the Fort Lauderdale Boat Show about deep-sea organisms that live in the Gulf of Mexico and will have games to play and prizes to give out! All K-12 teachers should stop by our booth for a token of our appreciation.

DEEPEND presentations: 11am and 3pm each day 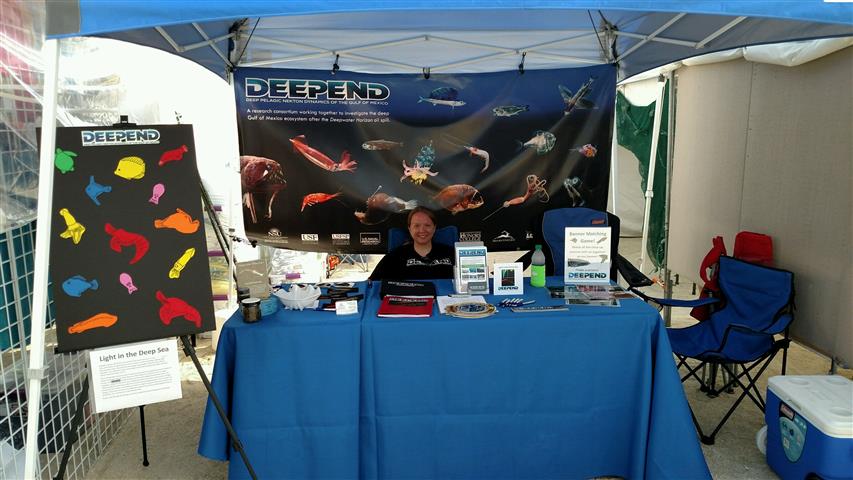 The club is honored to have Professor Tracey Sutton speak about his research. He is the director and lead principal investigator of the "Deep Pelagic Nekton Dynamics Consortium (DEEPEND)",  Guy Harvey Oceanographic Center, Halmos College of Natural Sciences and Oceanography, Nova Southeastern University.  "Life and Death in the Deep Ocean" will detail what happens in the "dark" ocean that we never visit, and why it is so important.  This will be a fascinating talk that U will not want to miss. Plus great food and drinks at Shenanigans East Side Pub at a very reasonable price, awesome company, and free door prizes.  cheers, arthur

Learn more about the event

Talk about awesome Halloween Costumes. Humans have got NOTHING on these wonders of the deep. That’s right, every day creatures like this are doing what they do – swimming around in the deepest parts of our oceans. The diversity of these deep sea animals is something truly remarkable – how they’ve adapted to their surroundings and the status of their marine environments are things we’re studying at DEEPEND. So when you go to your Halloween party, see if anyone is dressed like a Dragonfish or a Fangtooth – now that would be really cool!

Planning is underway for the 6th Annual St. Petersburg Science Festival, a regional celebration where families and the public can explore the wonders of hands-on science, technology, engineering, art, and math (STEAM). The 2016 festival will be held on October 21-22, along the waterfront campus of the University of South Florida St. Petersburg. The event is held in conjunction with MarineQuest, the annual open house of the Florida Fish and Wildlife Conservation Commission's Fish and Wildlife Research Institute.

DEEPEND will be represented at the Festival so stay tuned for details.

Day 1 of the St. Pete Science Festival has just ended!  Students from Pinellas county joined us for the day going through  "mini lessons" to learn about what the DEEPEND team does.  We had 10 very enthusiastic groups come by and everyone had fun while learning!

The public is invited to join DEEPEND and the rest of the festival tomorrow during day 2 of the event!  Doors are open from 10-4pm.  Stay tuned for more pictures from tomorrow's excitement! 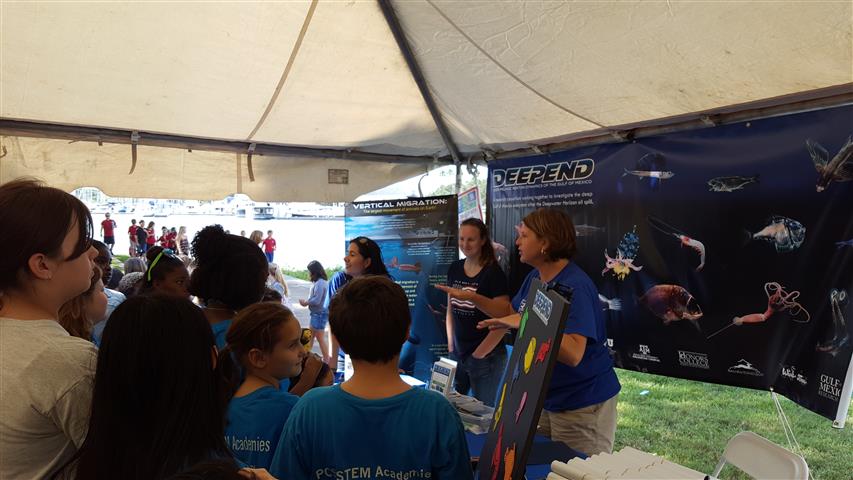 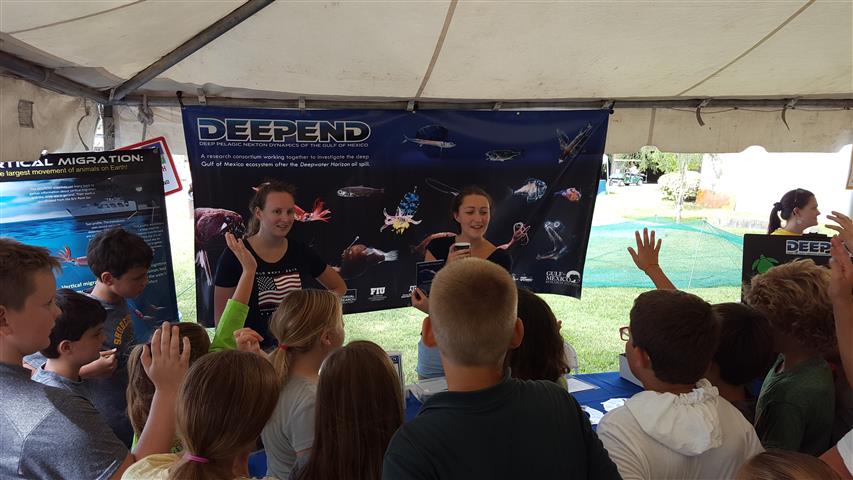 Florida Branch of the American Society for Microbiology Presentation

NSU MS graduate student Lindsay Freed presented preliminary DEEPEND angler fish symbyosis data in the poster, "Characterization of Bacterial Symbionts within Anglerfish and Seawater from the Northern Gulf of Mexico " at the recent annual meeting of the Florida Branch of the American Society for Microbiology. The University of Miami Rosenstiel School of Marine Sciences (RSMAS) played host to about 125 scientists (mostly students) for a day and half of talks and posters. 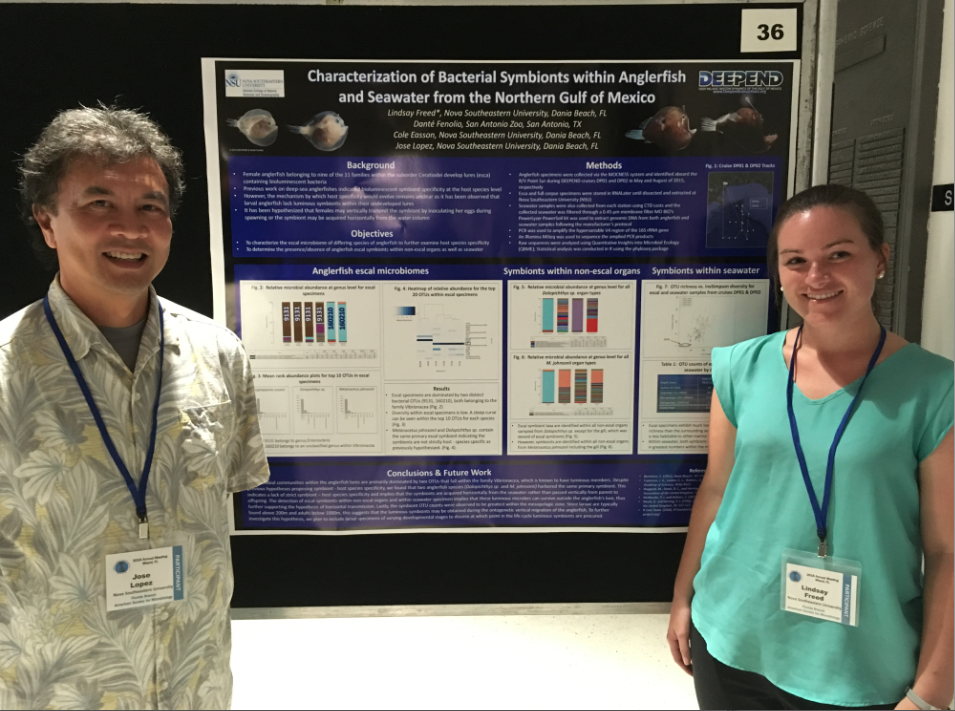 A DEEPEND retreat was held on the campus of University of South Florida, St. Petersburg on September 23rd-24th.   In attendance were co-PIs, research scientists, and students.  A broad range of topics were discussed from water feature classification, to genomics, to physical oceanography and food web dynamics. 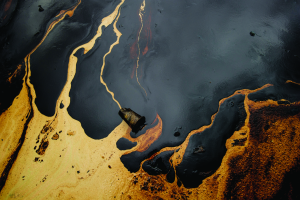 It has been six years since the Deepwater Horizon Oil Spill dumped millions of barrels of oil into the Gulf of Mexico. Plants and animals were harmed and the places they call home destroyed. The money brought in by fisheries and tourism was cut. A way of life was tarnished.

With the highly anticipated Deepwater Horizon movie starring Mark Whalberg, Kurt Russell and Kate Hudson due for release later this week, attention to one of the world’s worst oil spills is sure to be reignited.

But long before cameras started rolling on the disaster thriller, researchers at FIU’s School of Environment, Arts and Society have been focused on uncovering the far-reaching environmental damage done to the Gulf of Mexico from the oil spill. Their goal is to inform future ecological assessment efforts to better monitor and understand changing conditions.