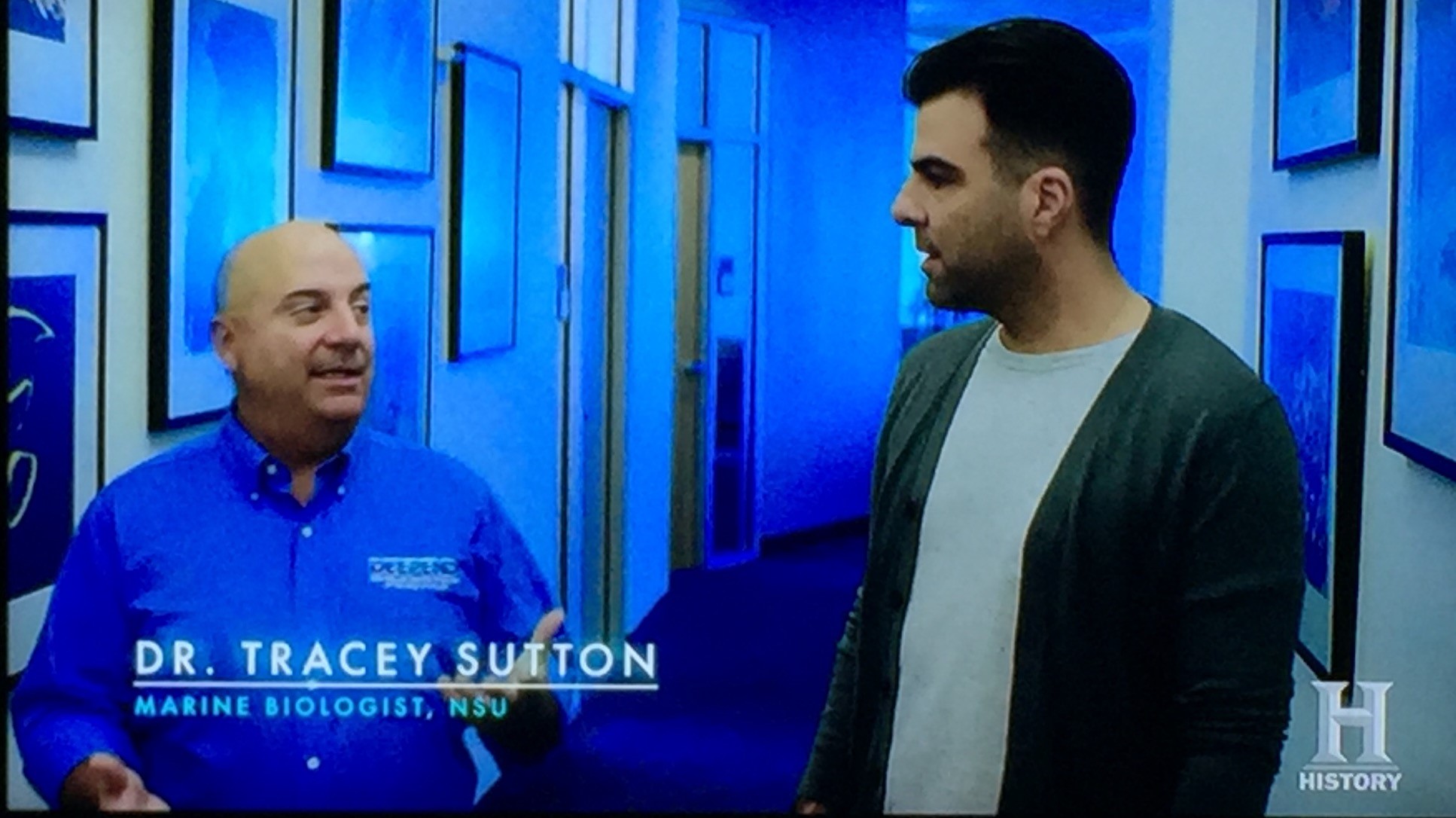 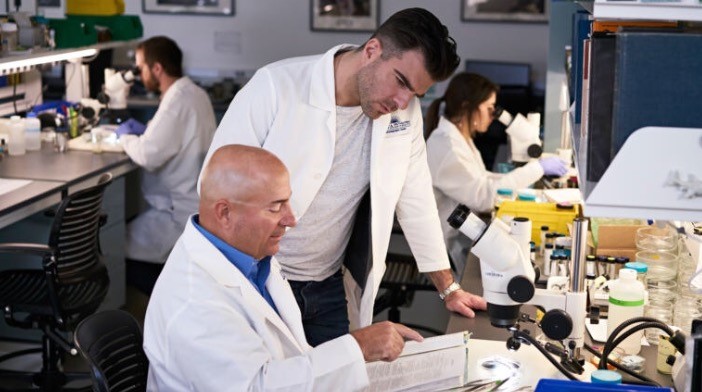 On August 3rd, 2018 Dr. Tracey Sutton's Oceanic Ecology lab at Nova Southeastern University was featured on the new series "In Search Of" on the History Channel with host Zachary Quinto. Check out this episode about the deep sea!! You will learn about a new snaggletooth species (Astronesthes) discovered through DEEPEND's research! 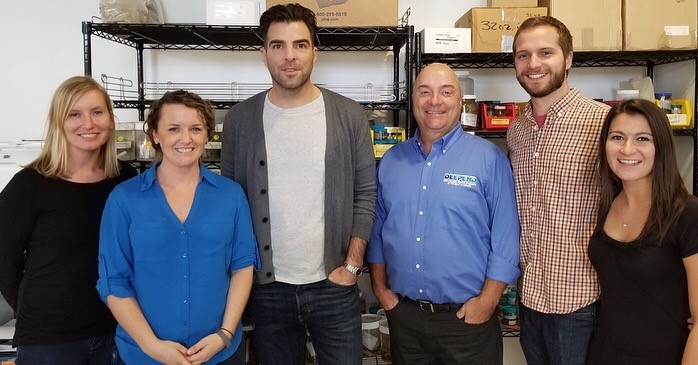 Life Aboard a Research Ship

One of the DEEPEND team members, Dante Fenolio, our resident photographer, conducted a series of short videos during our recent cruise highlighting "Life Aboard a Research Ship" through his Facebook page. If you're interested about the many pieces it takes to make a research cruise successful, check out the 20 or so video clips! Many of the Point Sur crew and the DEEPEND science team discuss their roles while onboard. Enjoy! 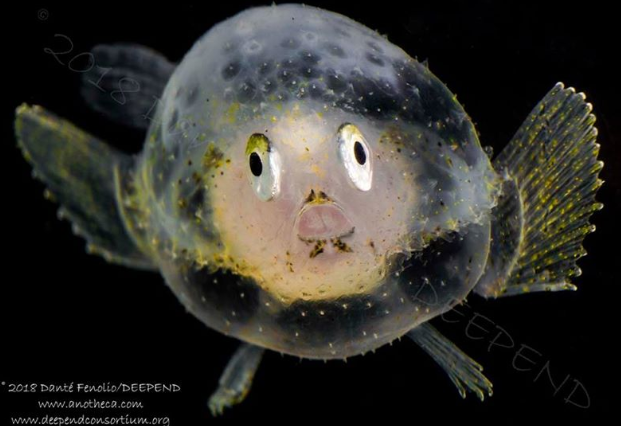 The deep-pelagic habitat (200 m depth to just above the seabed) is the largest habitat in the Gulf of Mexico, yet we know very little about it compared to coastal and shallow-water habitats. Our limited understanding of this major marine habitat makes it extremely difficult to assess the effects of disturbances such as the Deepwater Horizon oil spill. Travis Richards seeks to better understand the structure of deep-pelagic food webs by tracing the energy flow from the food web base through higher trophic levels. His research will help expand our understanding of the deep-pelagic habitat and serve as a reference point for future studies and response efforts.

The GoMRI community embraces bright and dedicated students like Travis Richards and their important contributions. The GoMRI Scholars Program recognizes graduate students whose work focuses on GoMRI-funded projects and builds community for the next generation of ocean science professionals.

Travis's work is a feature story on the GoMRI website.  Read about it here

The DEEPEND Consortium held it's first Synthesis Workshop at NSU's Guy Harvey Oceanographic Center in Dania Beach Florida on May 14th-15th, 2018.  The workshop was well-attended by 50 consortia members, students, and affiliated scientists, including the following external participants:

We thank all participants who joined us in this synthesis effort.  The meeting was recorded and will be transcribed for a report.

The meeting agenda can be downloaded here. 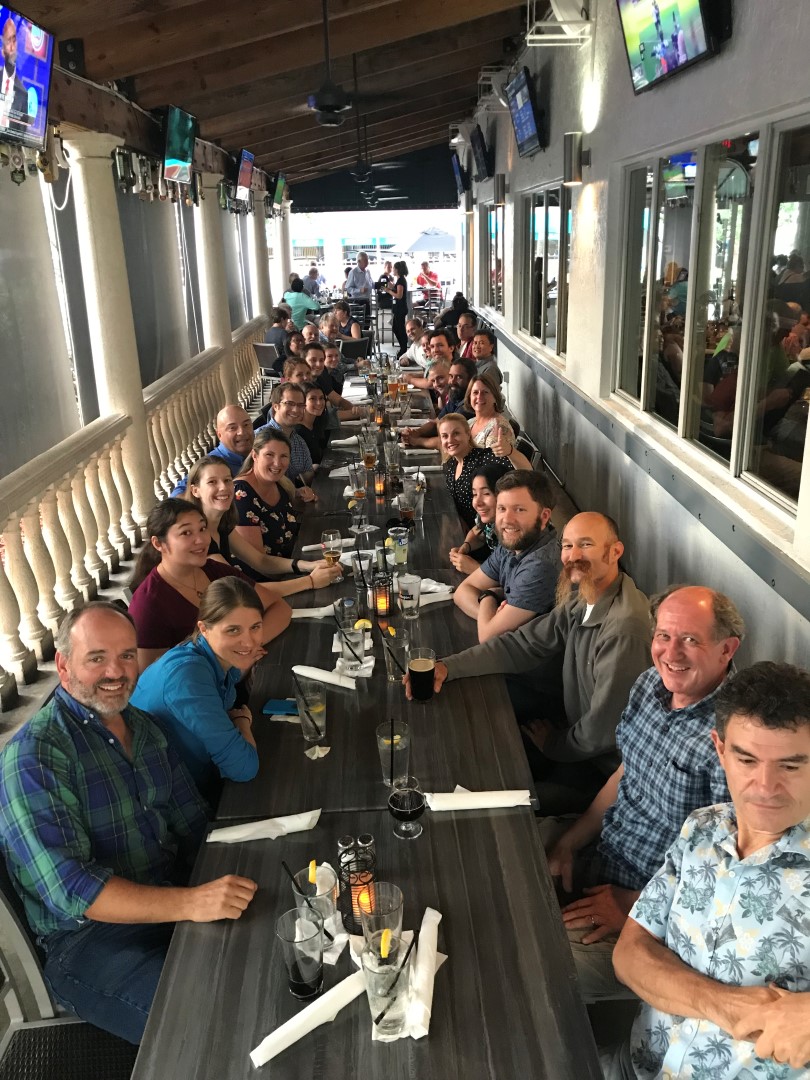 Saturday, April 28th, DEEPEND team member, Heather Judkins, narrated the midwater transect portion of the NOAA Okeanos dive which is part of a cruise currently being conducted in the Gulf of Mexico which ends on May 3rd. Tracey Sutton was also part of the shore-based scientific team, identifying the various fish species that were seen. We had amazing sightings from siphonophores to fishes to even cephalopods!

The goal of the Okeanos cruises are to explore new areas of both benthic and midwater regions around the world. This year, the Okeanos team will be in the Gulf of Mexico and the western Atlantic Ocean. The public are invited to view the live feed of the explorations at this site: https://oceanexplorer.noaa.gov/okeanos/

Nova Southeastern University kicked off the conference program for the year by hosting a two-day Graduate Student Symposium, which featured seven great talks from DEEPEND’s principle investigators and graduate students. Presentations included: genomic analysis of microbial symbionts found in deep-sea in anglerfish lures and in the water column of the Gulf of Mexico (Lopez et al.), the trophic ecology of a bathypelagic fish family (tubeshoulders, Novotny et al.), ingestion of microplastics by deep-pelagic animals (Bos et al.), the relationship between parasites and size, species, and behaviour of deep-pelagic fishes (Woodstock et al.), the distribution of larval tuna (Pruzinsky et al.) with respect to oceanographic features; the dramatic declines in pelagic fishes (Sutton et al.) and crustaceans (Nichols et al.) in the Gulf after Deepwater Horizon, and classifying pelagic habitat features in the Gulf of Mexico (Johnston et al.) 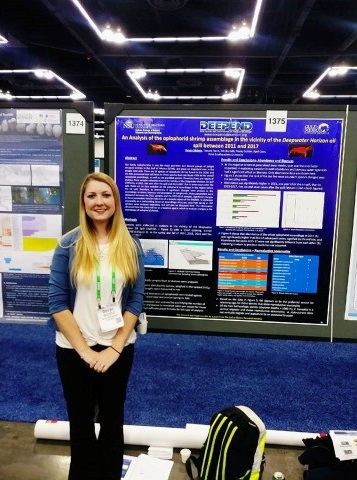 In February DEEPEND researchers from multiple institutions presented research findings at the Gulf of Mexico Oil Spill and Ecosystem Science Conference (GOMOSES) in New Orleans, LA, and at AGU/ASLO/TOS Ocean Sciences Meeting in Portland, OR.

The aim of the GOMOSES meeting is to bring together a diverse range of researchers from all disciplines who are working on understanding the biological, chemical and physical processes that operate in the Gulf of Mexico. DEEPEND was well-represented, with 11 presentations. Heather Bracken-Grissom and Laura Timm presented work on the genetic connectivity of crustaceans in the Gulf of Mexico with surrounding regions. Heather Judkins and Kris Clark presented their work describing the distributions and diversity of pelagic molluscs (squids and heteropods, respectively). Regarding fishes, presentations described dramatic declines in abundances of deep-pelagic fishes after Deepwater Horizon (Sutton et al.),  biophysical coupling in a dominant mesopelagic fish family (lanternfishes; Milligan et al.), and pelagic habitat use by important coastal fishes (snappers/groupers; Velez et al.). Physical oceanographic presentations included work on frontal densities (Hu et al.), methods to track the Mississippi River plumes using satellite measurements (Hu & Le), and a newly developed method to classify pelagic habitat features in the GoM (Johnston et al.). 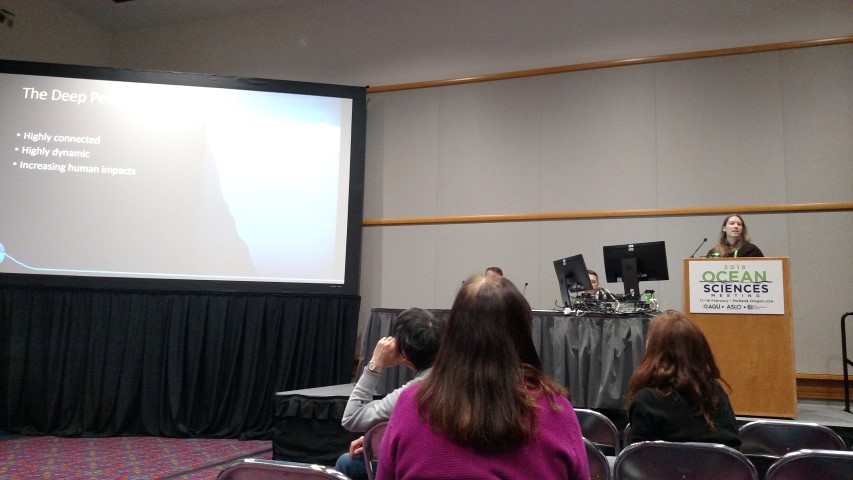 After the GOMOSES meeting, we were straight on a plane to Portland and the Ocean Sciences Meeting, where (despite an unfortunate outbreak of the flu), the DEEPEND team gave another eight presentations. These included talks describing the ecology of deep-living fishes (see above), and an assessment hydrocarbon contaminants (polycyclic aromatic hydrocarbons) in mesopelagic animals after Deepwater Horizon (Romero et al.). DEEPEND members presented posters describing how microbial communities in the Gulf of Mexico are influenced by diel vertical migrations (Easson et al.), how the assemblage of Oplophorid shrimps has changed since the oil spill (Nichols et al.), habitat classification (Johnston et al.), and the great successes of DEEPEND’s educational outreach program (Musgrave et al.).

To round out our program of talks, DEEPEND’s lead scientist, Tracey Sutton, and DEEPEND’s data manger, Matthew Johnston, gave invited lectures at  NSU’s Distinguished Lecture Series.  Tracey presented some of his recent work describing the global importance and structure of the deep-pelagic biome to faculty and students and Matt lectured on data visualization and interpretation. 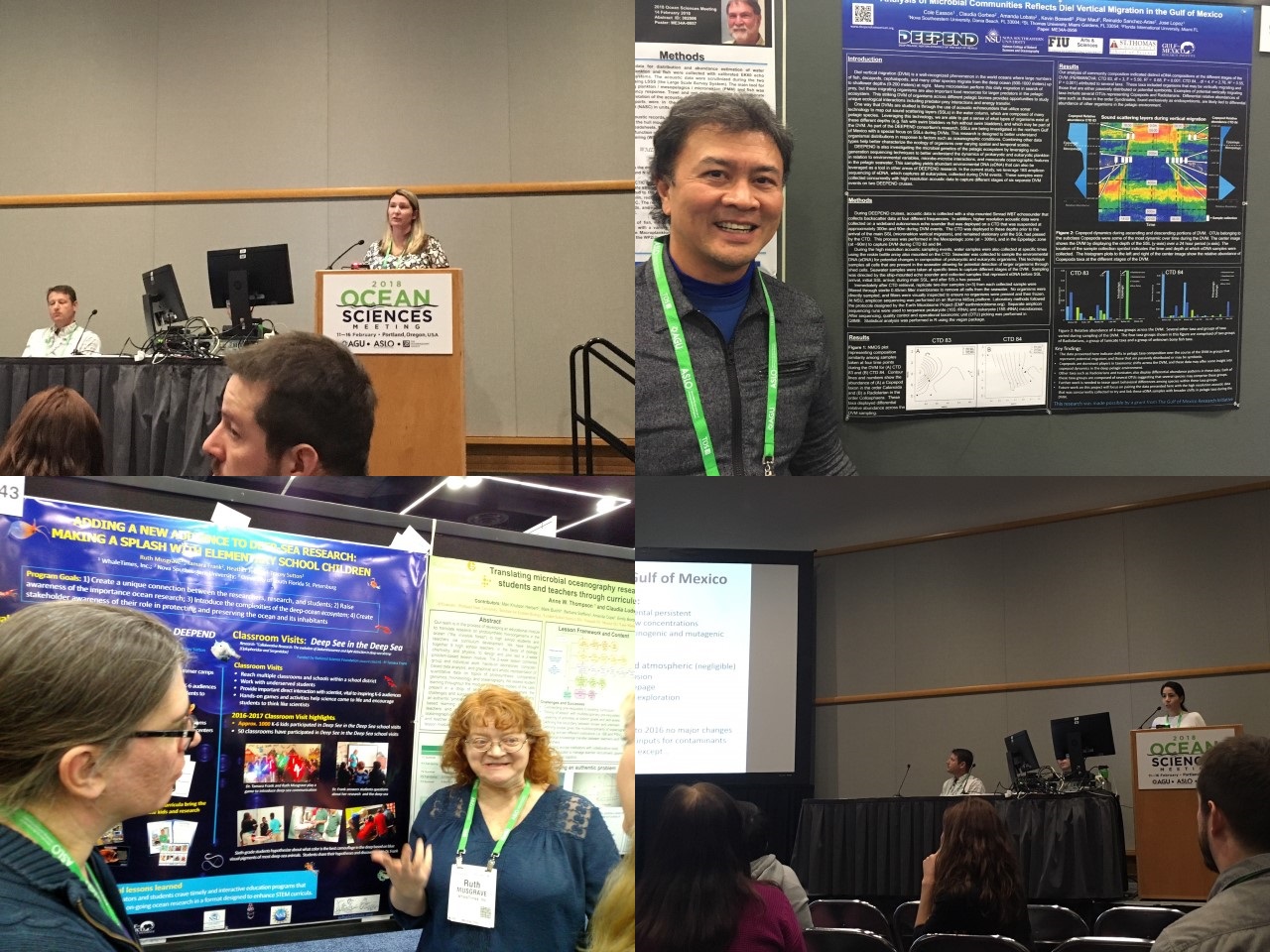 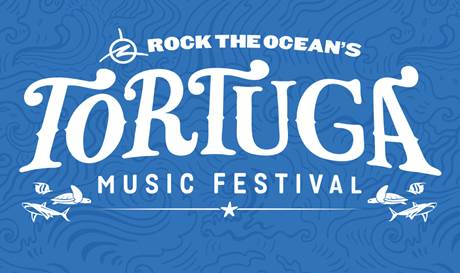 From April 6-8, 2018, DEEPEND members will be attending Rock the Ocean’s Tortuga Musical Festival at Fort Lauderdale Beach Park in Fort Lauderdale, Florida. DEEPEND members will have a booth at the Conservation Village, which will be located in between the two stages. Our booth will have deep-sea trivia and prizes! Come win some glow-in-the-dark tattoos! A DEEPEND t-shirt raffle will be held each day as well. Stop by and talk to several graduate students and professors about our research during this three day event! We are excited to meet you all and talk about the deep sea!

Read about all of NSU's participants here and to find out more information about Rock the Ocean’s festival/Conservation Village click here: TortugaMusicFestival.com 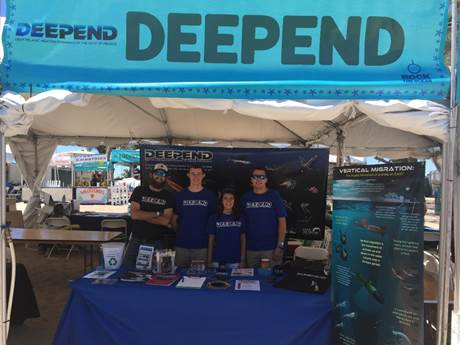 The DEEPEND timeline, illustrating the diversity of life in the Gulf of Mexico

The DEEPEND timeline was conceived by world-class photographer Danté Fenolio as a platform through which the DEEPEND team could convey the biodiversity that they have encountered in the Gulf of Mexico to the general public.  So much amazing biodiversity turned up in the trawling nets that we figured there had to be a way to show it all off.  The timeline allowed for a progression through the different cruise trawls and it allowed for a photographic display that we don't think has been developed or matched by any other deep sea biological survey.  There are images of some exceptionally rare deep water species and of some more common species.  The net result is a celebration  of the wildlife living in the water column of the incredibly diverse Gulf of Mexico.

Click here or the image below our timeline.  We hope you enjoy the show. 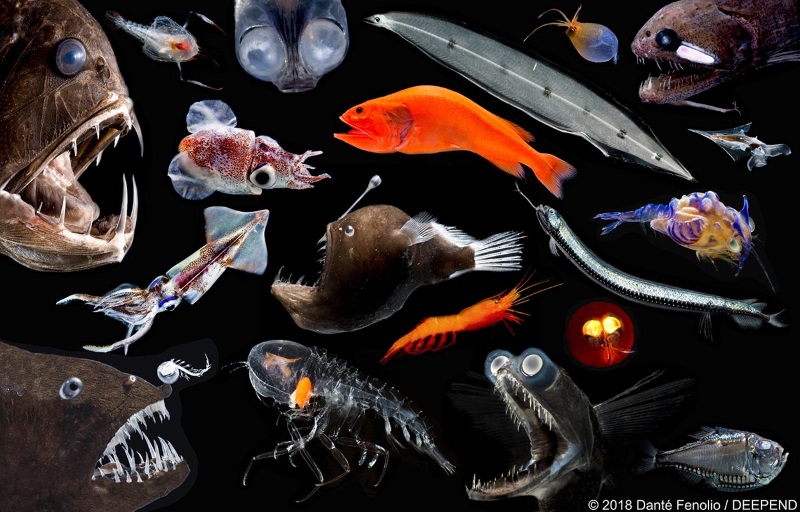