On April 18th, an art exhibit was opened at the Nelson Poynter Library on the USFSP campus to highlight work that USF System researchers have been conducting related to the DWH oil spill. DEEPEND and C-Image scientists gathered with the public to discuss current findings and answer questions related to our work. It was a fantastic opportunity to share our science and link it through the arts which included twenty images taken by Dante Fenolio for the DEEPEND portion of the exhibit. 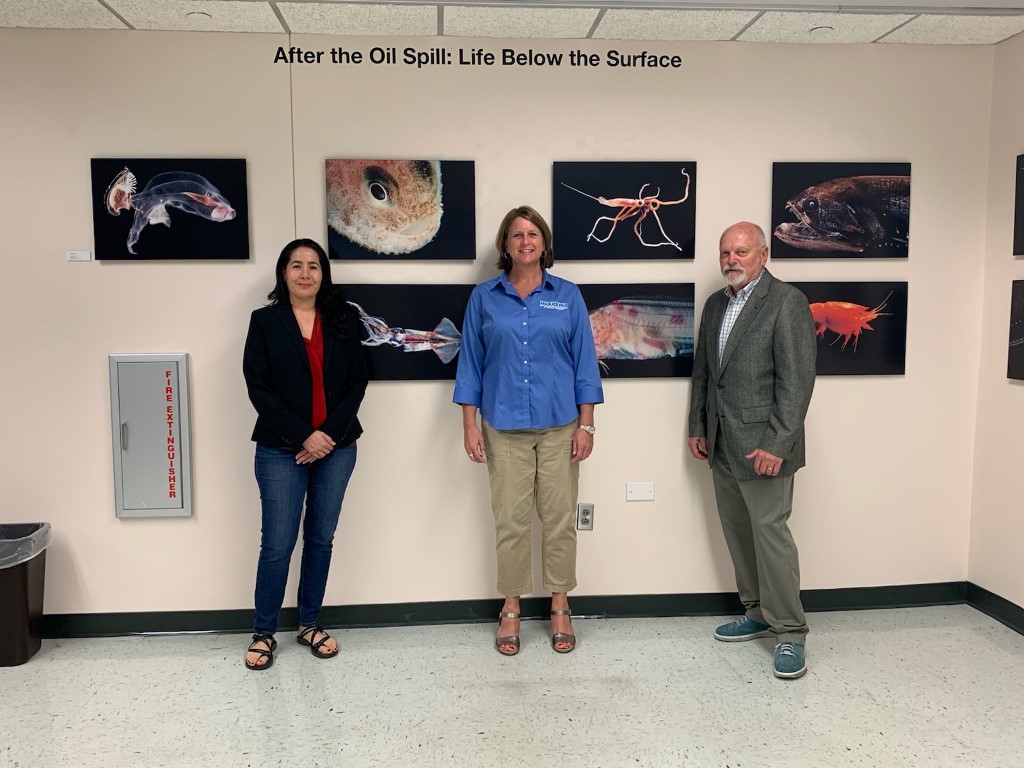 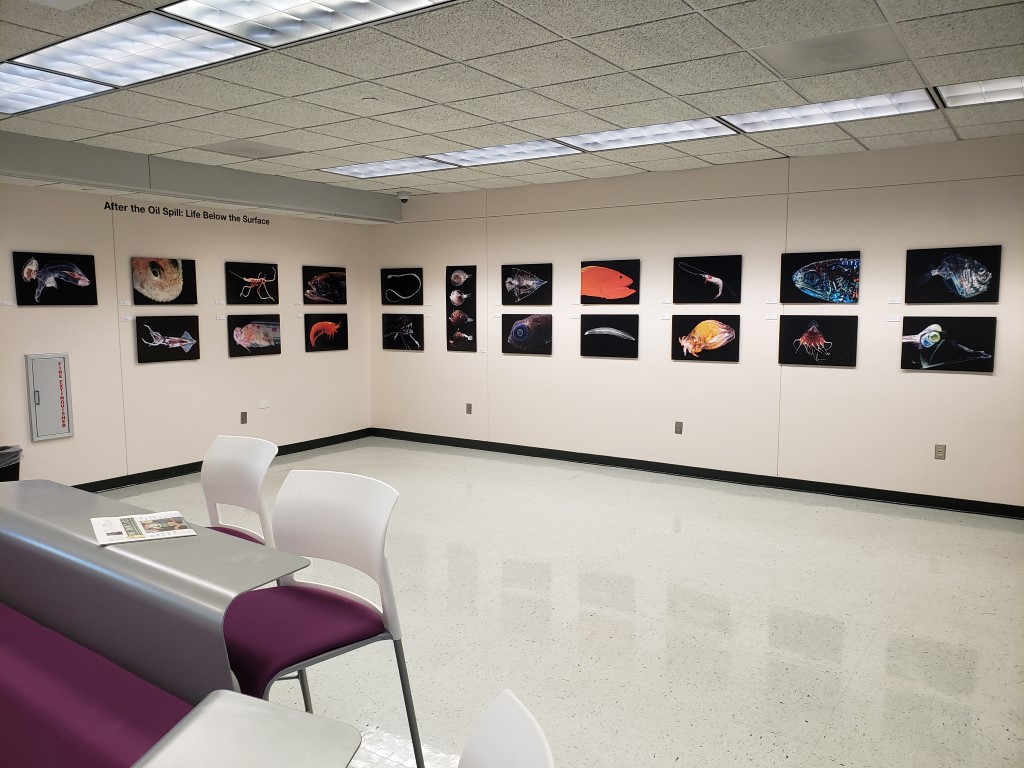 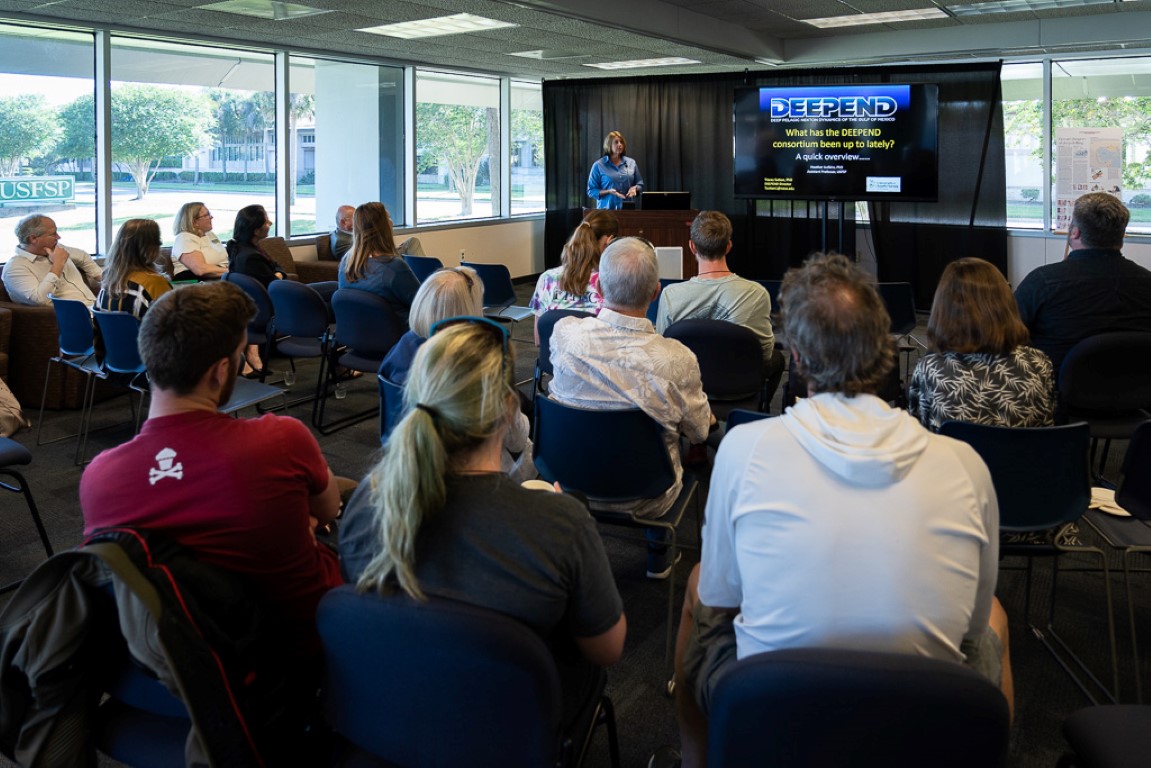 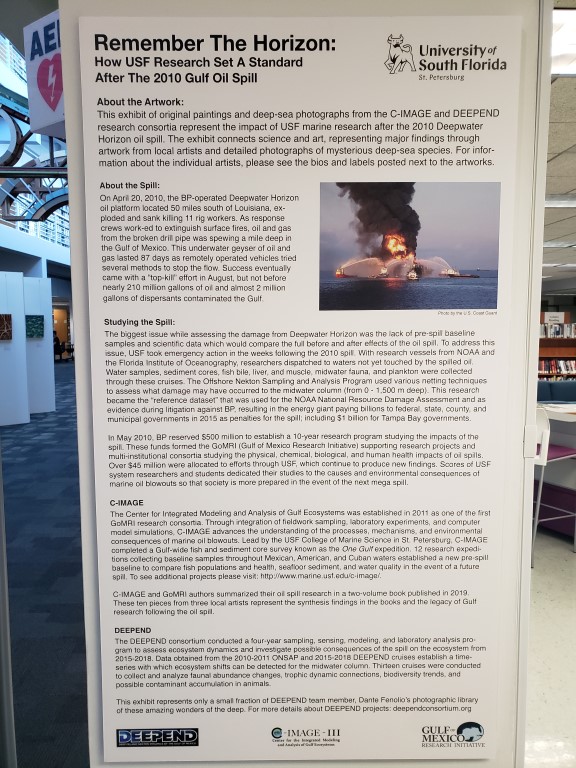 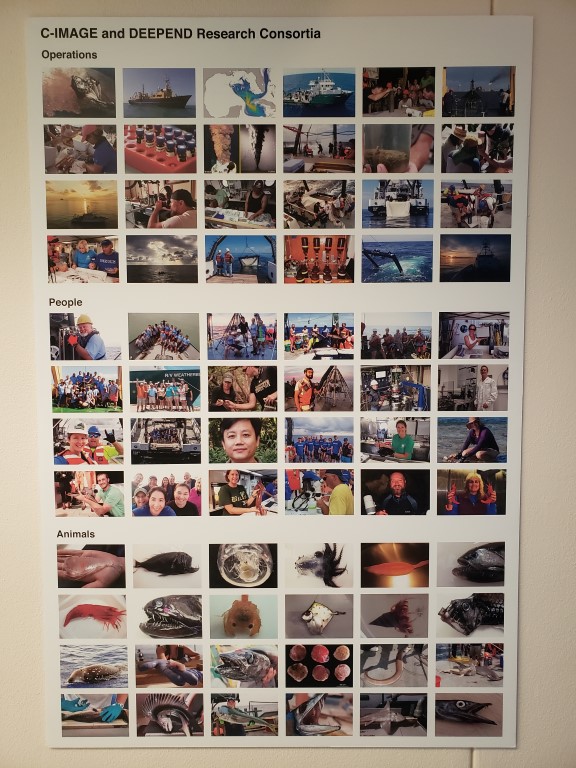 DEEPEND will be joining several other non-profit organizations focused on ocean conservation to educate fans and promote ways to save our oceans. The festival will take place in the sand on Fort Lauderdale Beach this weekend April 12-14. Fans will be able to learn about life in the deep-sea and the creatures that live there by playing some interactive games and conversing with our outreach coordinators. They will also have a chance to share their knowledge on social media in our photo booth while making a pledge to help #RockTheOcean. Be sure to get your official glow-in-the-dark DEEPEND anglerfish tattoo! 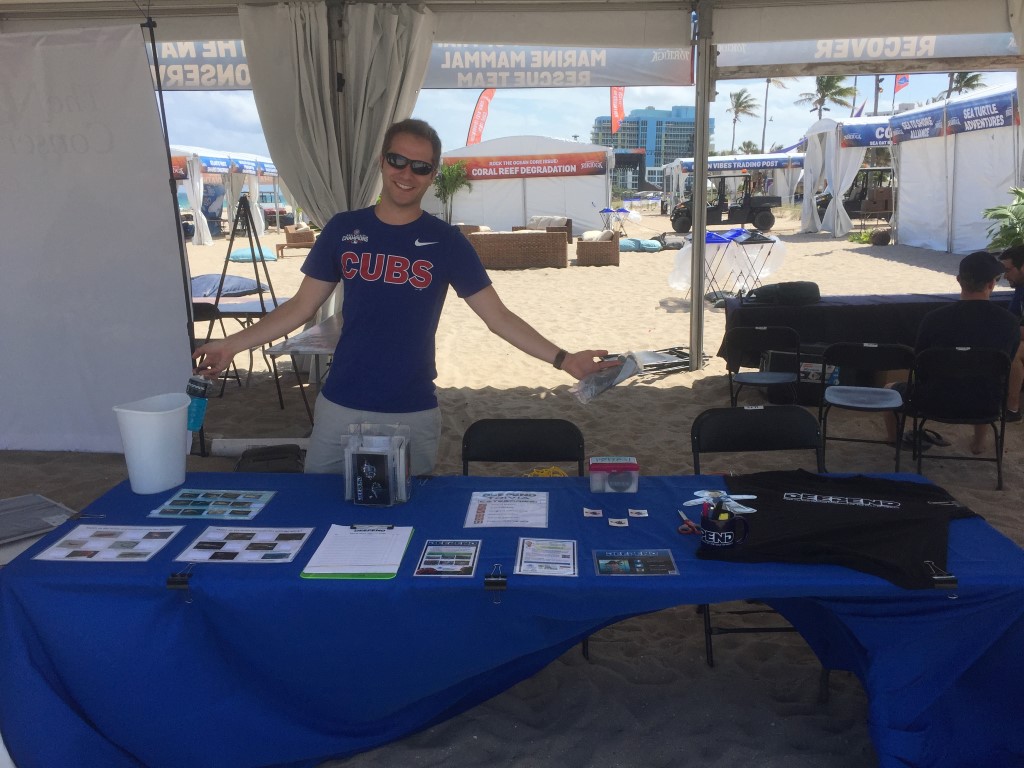 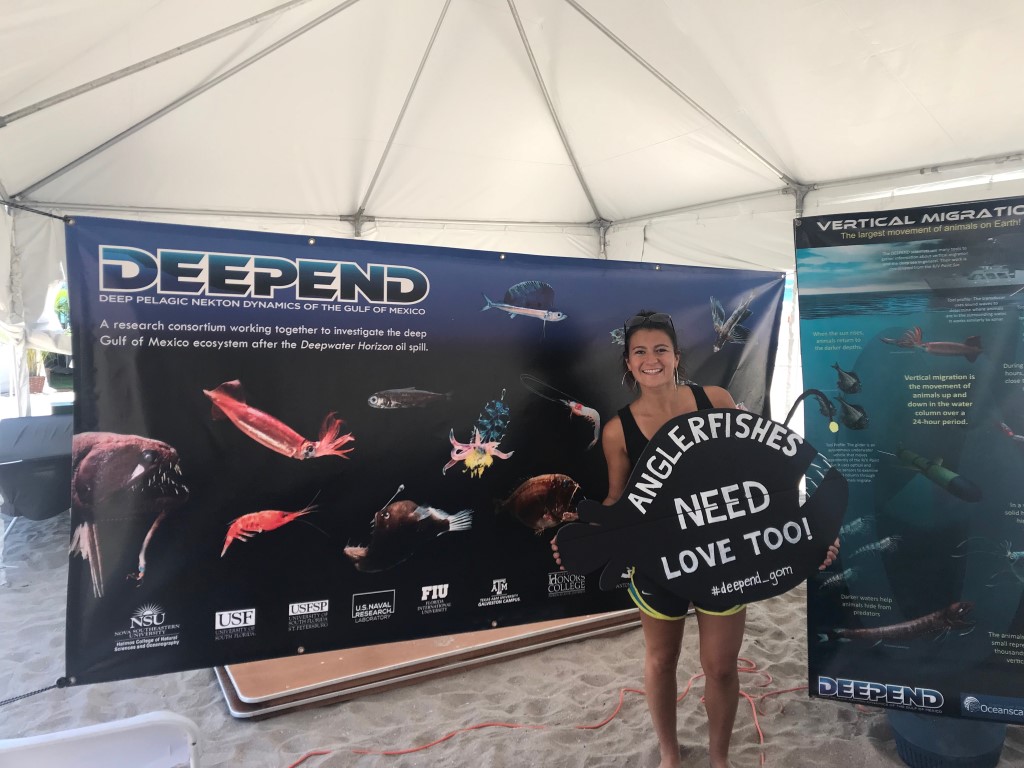 In total, there were seven oral presentations and 11 poster presentations. Isabel Romero (USF) led off DEEPEND presentations on Wednesday morning and discussed her research on bioaccumulation of PAHs in mesopelagic fishes.

Tracey Sutton, Rosanna Milligan, and Estrella Malca (all NSU) chaired Session 17: Out of the blue: what have we learned about the pelagic Gulf of Mexico, what remains unknown, and how can we use the information? NSU Research Associate, Nina Pruzinsky, was the Invited Speaker and addressed environmental drivers affecting the distributions of tuna early life stages in the Gulf. This session also included oral presentations on novel DEEPEND products by Sutton (NSU; DEEPEND oceanic fishes synthesis) and Ron Eytan (TAMUG; deep-pelagic fishes DNA barcode library). Also, Estrella Malca presented results on larval tuna growth between spawning grounds. 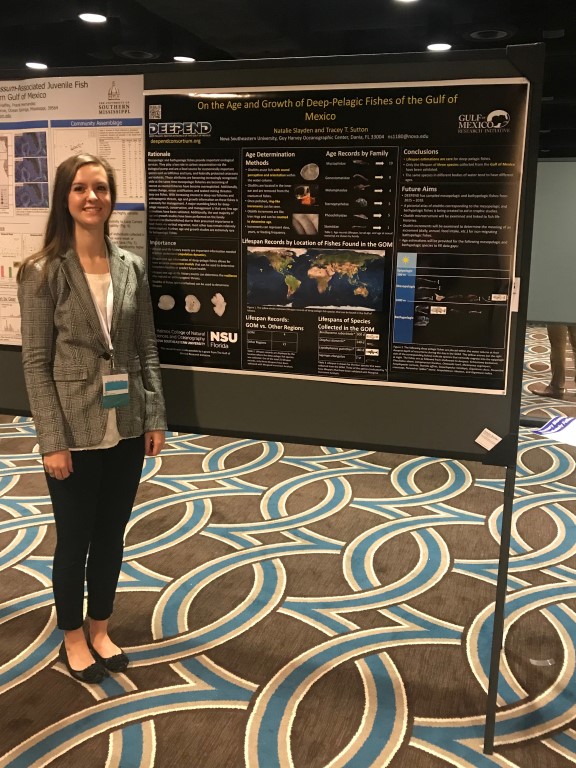 At the closing All-Hands Meeting Dr. Sutton, along with Dr. Murawski, presented a synthesis plan for GoMRI Core Area 3 (Ecology). All in all, a very busy and productive conference!

DEEPEND makes a splash at the 15th Deep-Sea Biology Conference 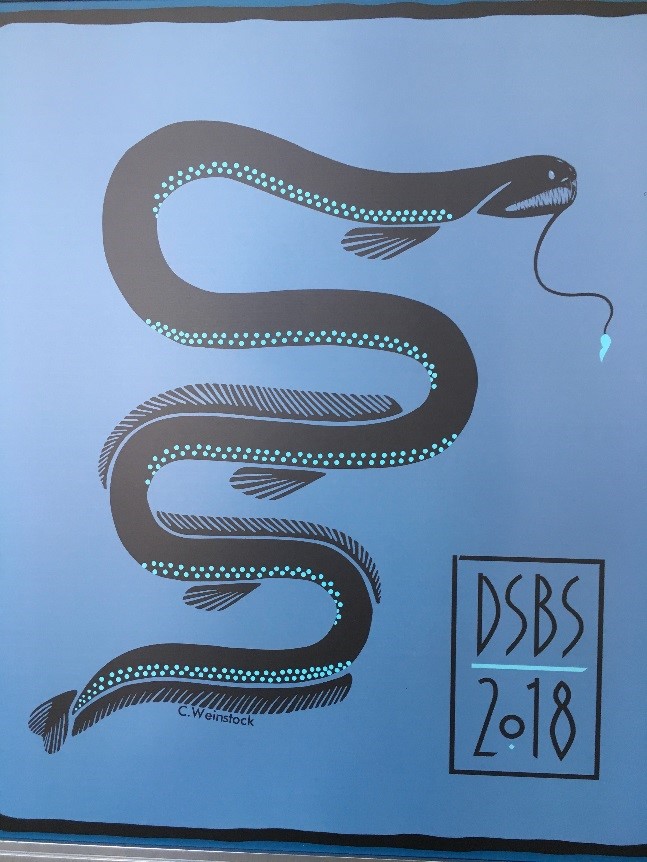 Florida Atlantic University graduate student, Richard Jones, won two travel awards, which funded his travel to this conference. One award was granted by DEEPEND, using funds from provided by Rock the Ocean’s Tortuga Music Festival. Proceeds from this event were donated back to the non-profit organizations (like DEEPEND), who participated in this educational and entertaining event. The other travel award was granted to Richard for winning Best Student Poster at the FAU Environmental Sciences Program retreat. We are very proud to announce that Richard’s poster presented in the Pelagic Systems session won Best Student Poster by the Judge’s Committee! The poster was entitled “Ecology of the barracudinas (Paralepididae) in the Gulf of Mexico.” The Deep-Sea Biology Society awarded him a one year membership and a £100 cash prize. You can read more about his experience on Richard’s blog here. You can read the abstracts for these posters on the Deep-Sea Biology Symposium website or go directly to the pdf here. 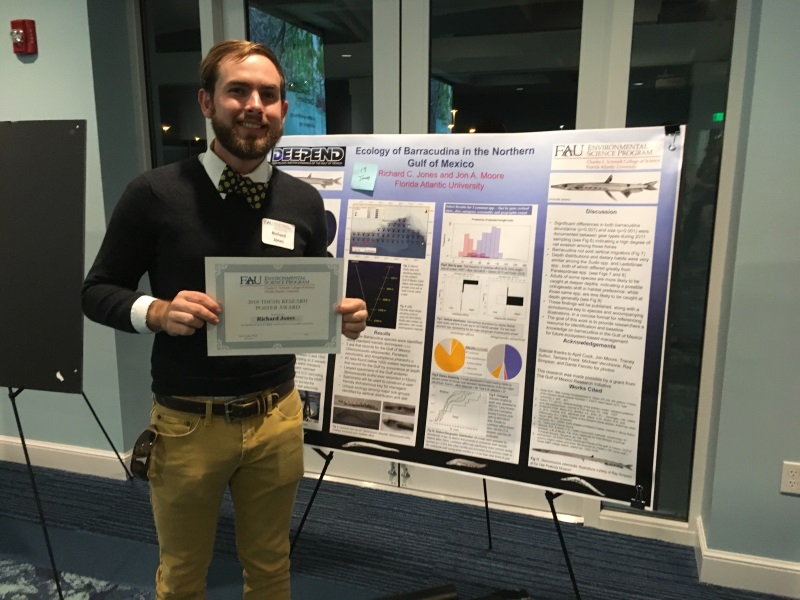 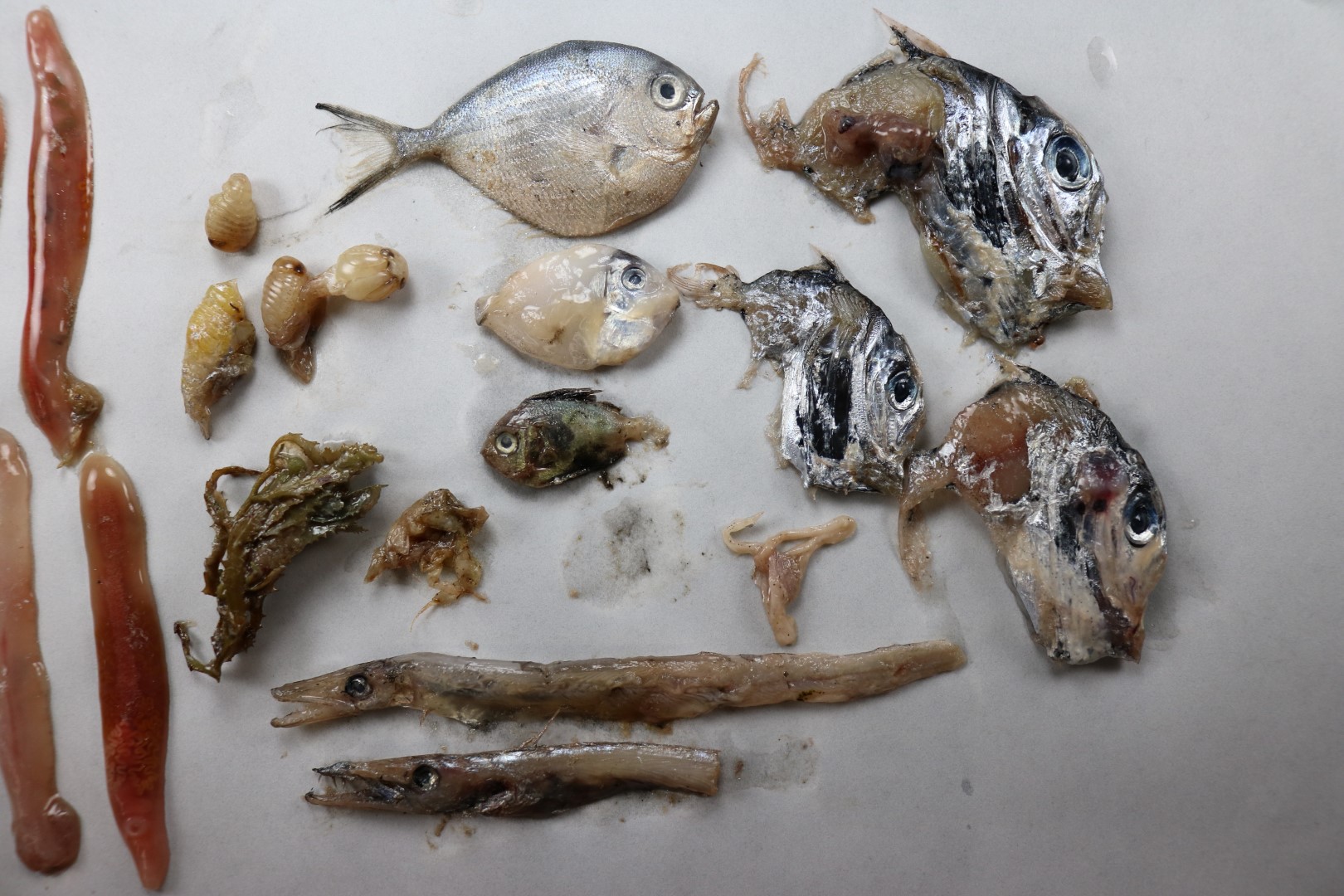 DEEPEND and C-Image researchers (T. Sutton, S. Murawski, H. Judkins, I. Romero and others) met in December to process pelagic fishes that were collected during a C-Image longline cruise that occurred in August in order to examine the possible linkages between these fast, deep-diving fishes to the midwater organisms that are the focus of DEEPEND research. Over 45 fish stomachs (including Lancetfish, Swordfish, Silky Shark, and others) were examined and contents were identified to the species level when possible. The stomach contents were in surprisingly good condition with many species successfully identified. There were multiple midwater fishes and cephalopods that were discovered which shows a strong link between the two groups by way of predator/prey interactions. 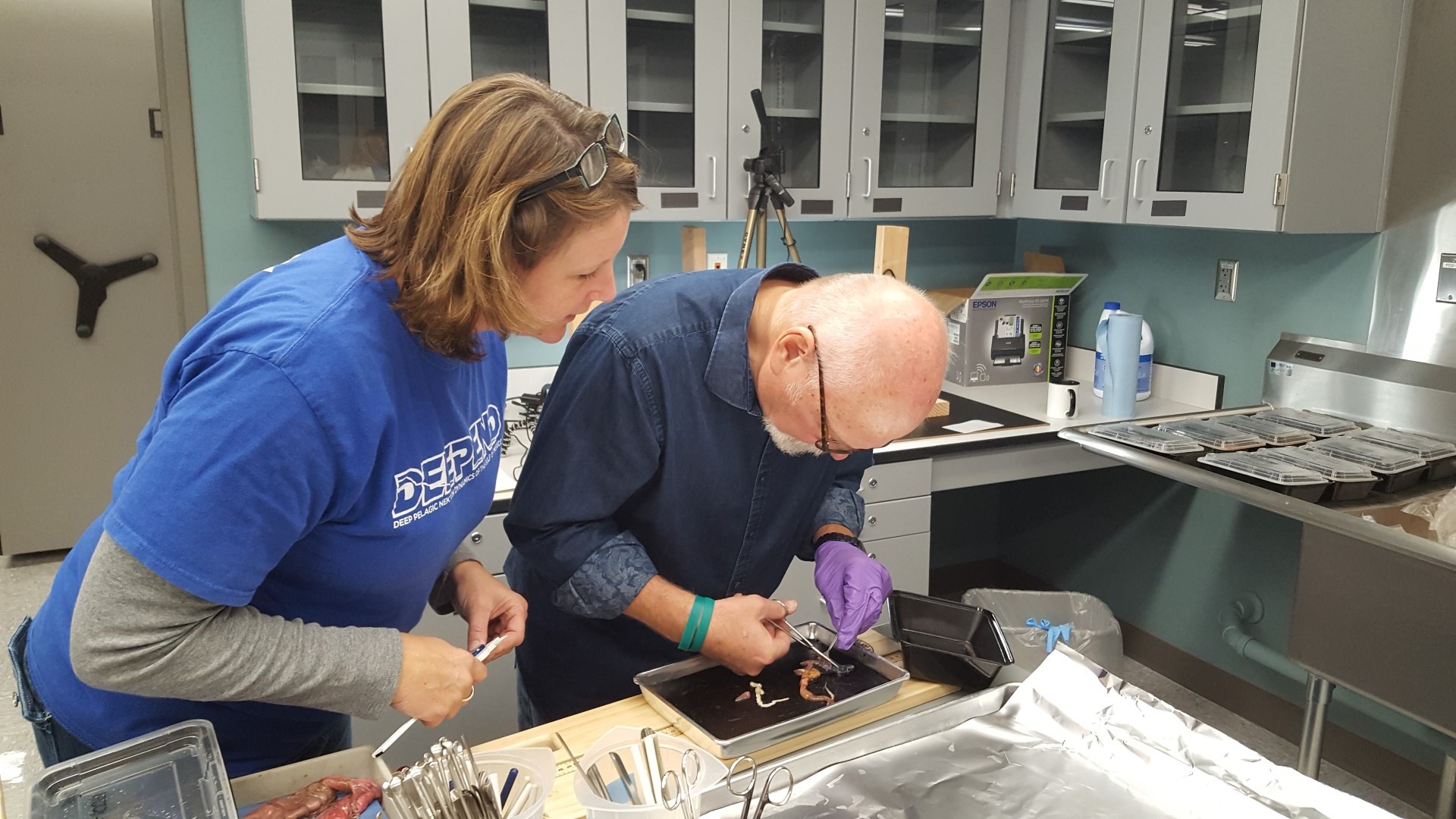 Heather Judkins was thrilled to coordinate the triennial CIAC Conference in St. Petersburg, FL in November. CIAC (Cephalopod International Advisory Council Conference) was formed in 1983 to promote the sharing of cephalopod research around the world. This CIAC conference drew 230 scientists to the region for two-day practical application workshops as well as the five-day conference with over 100 oral presentations, 18 Lightning talks, and 150 Poster presentations. There were 30 countries represented at the event and attendees enjoyed a welcome reception at The Florida Aquarium, field trips around the region, and a final CIAC Celebration banquet in Gulfport, FL. During the week, Dr. Judkins was also elected the next CIAC president until 2021 at the next conference which will be held in Portugal. Overall, it was a great success! For more information about the conference or the CIAC organization, please visit https://cephalopoda.org/ 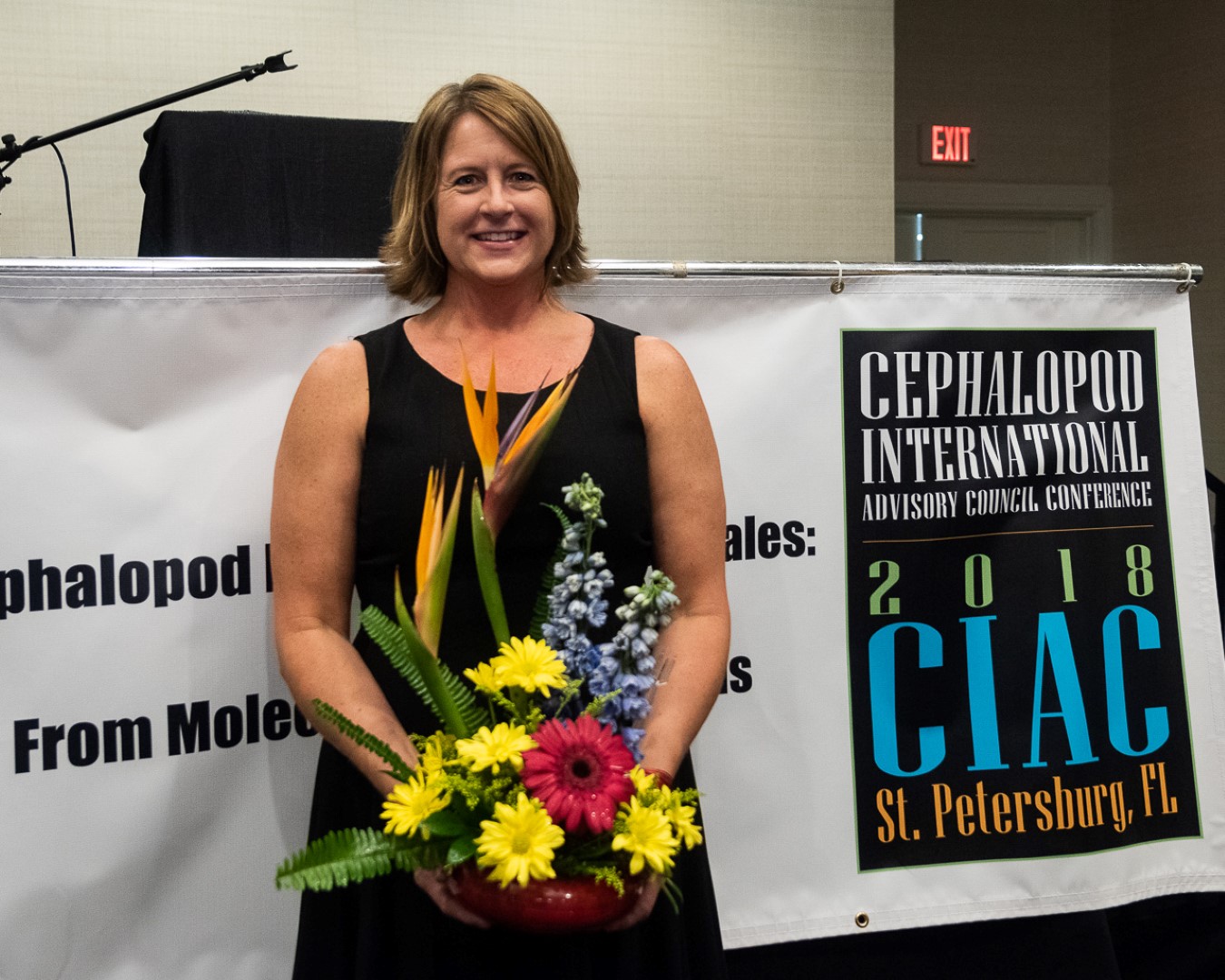 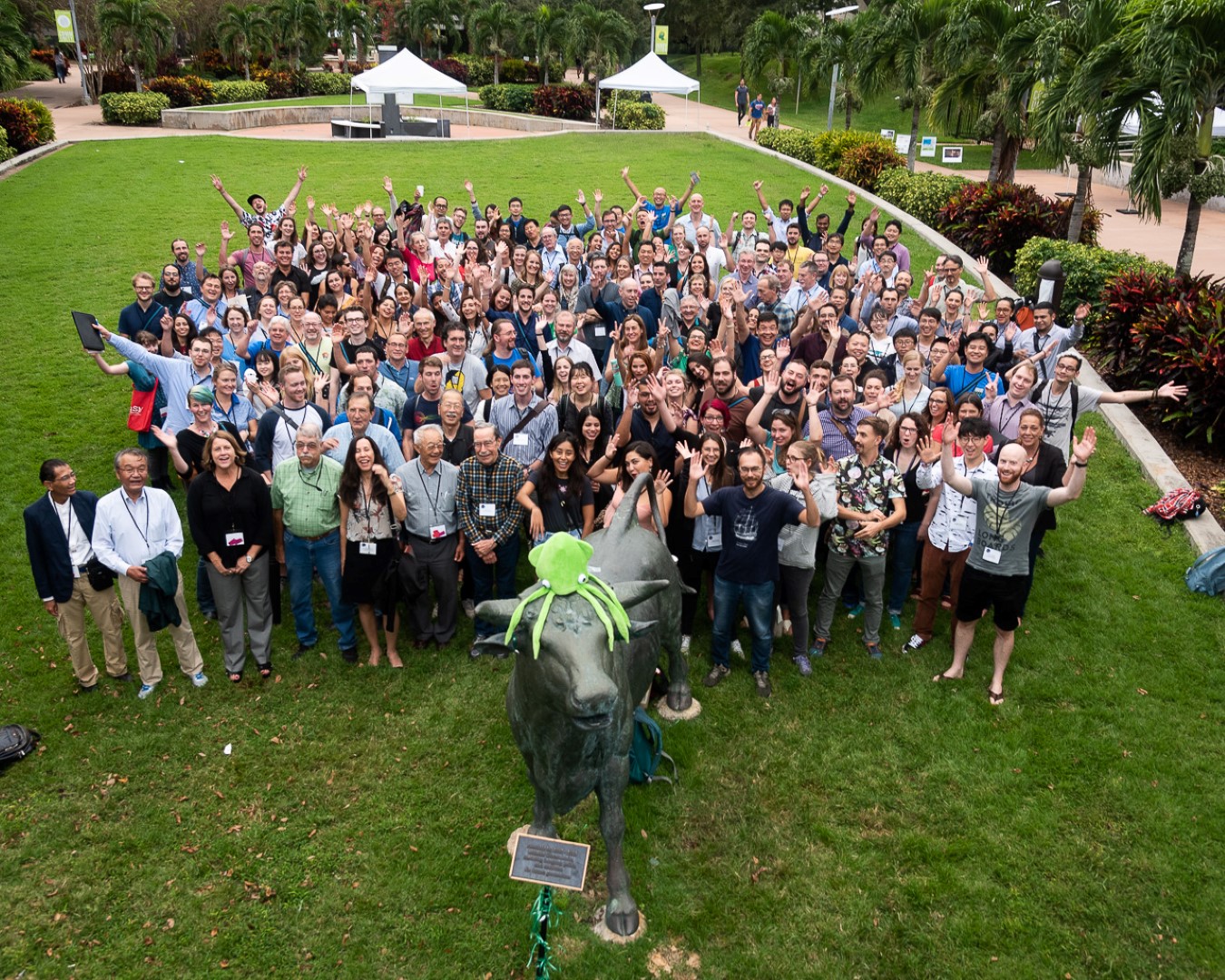