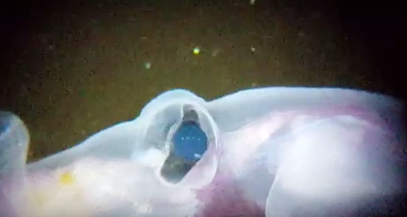 Their eyes have a well-formed spherical lens with the retina the correct distance away for the lens to focus an image. The strangeness is in the shape of the retina and how it is used. In atlantids, the earliest diverging family group of heteropods, the retina is a narrow band. To view its environment, the animal rotates the narrow retina up and down periodically through a 90 degree arc. We think that when it does this, the animal scans successive slices of the environment and then mentally assembles a complete image much like we do when we watch a television screen; a TV picture is also comprised of many separate lines displayed successively but so rapidly that we see them as a complete picture.

Having a full-sized retina is a problem for animals of the ocean's "twilight zone" where predators look upward for silhouettes of potential prey against the dim light filtering down from the surface. A large retina makes a large silhouette/target because, in order to function, the retina has to absorb as much light as possible. A narrow scanning retina would reduce this problem while still functioning to monitor the visual environment effectively.

I knew about heteropod eyes, and teach about them in Deep-Sea Biology. However, I had never watched one in action until I went to sea this month as part of a group studying the swimming animals of the deep Gulf of Mexico. We caught this Oxygyrus inflatus and I was able to record the video by shooting with my cell phone through the eyepiece of a microscope in the cramped laboratory of a rolling research ship.