Posted by April Cook on Wednesday, 01 November 2017 in News 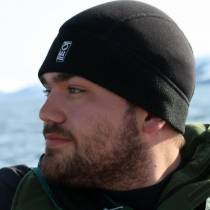 When you walk into a restaurant and order sushi, or a fish dinner, do you ever contemplate the series of events that led to that fish arriving onto your plate? Probably not…you’re hungry, but the odds that that particular animal would make it to a harvestable size are astounding. I’ll give you an example. A 10-year-old red snapper in the Gulf of Mexico can produce approximately 60million eggs annually. Of those 60 million eggs, only 450 individuals will reach a size of 5cm. At this size they are still susceptible to predation, starvation, and advection away from suitable habitats. My name is Sebastian Velez and I’m a Master’s student in Biology at Florida Atlantic University, studying juvenile snappers and groupers in the Northern Gulf of Mexico collected during the DEEPEND Cruises. I am particularly interested in what happens to these organisms when they are wafted far out to sea, off the continental shelf in areas where depths can reach 1500m. 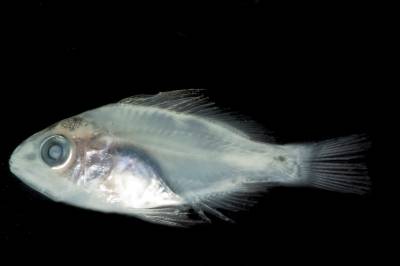 This is a juvenile Red Snapper, Lutjanus campechanus. This species supports multimillion dollar recreational and commercial fisheries in the Gulf of Mexico.

Now this concept of advection away from suitable habitat is something that occurs as a result of the life history of snappers and groupers. Both families form seasonal spawning aggregations, at which point the resulting larvae are wafted out to sea for 20-50 days, and begin settling on nearshore habitats. The currents responsible for this dispersal include; the Mississippi River Discharge Plume, The Loop Current, and a series of cyclonic and anticyclonic eddies. But every once in a while these larvae get wafted a bit too far offshore. Literally hundreds of kilometers away from their preferred habitats and so the question is; what happens to these animals when they are so far from shore?

The literature is very vague as to what happens with these expatriates, with most accounts only stating that this phenomena takes place and they most likely die as a result of starvation or predation. Thanks to the DEEPEND cruises, we have found that the biodiversity of these expatriates within both families was impressive, with some of the most notable species being; Goliath Grouper, Snowy Grouper, Nassau Grouper, Red Snapper, Vermillion Snapper, Grey Snapper, and Queen Snapper. Our study also suggests that a few members within these families have the ability to stall their settlement, specifically the Wenchman snapper. Individuals were often found ranging from 14-47mm in standard length, lengths usually attributed to newly settled individuals. We also found new depth records for Red and Wenchman Snapper down to 1500m, well past their normal distributions, most likely in an attempt to find suitable habitat where none exists. 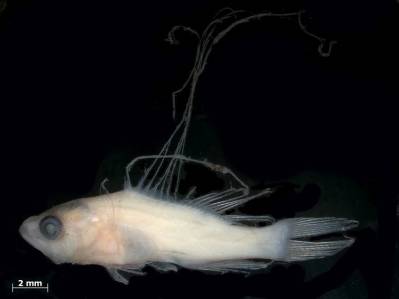 This is an unidentified member of the Subfamily Liopropomatinae, Liopropoma sp. Another type of grouper with vivid colorations and often referred to as basslets, these are very popular in the aquarium trade.

These fishes represent multi-million dollar industries in the form of commercial and recreational fisheries. Understanding the biology and life history of exploited species is imperative in informing future management decisions. The pelagic stages of these species have historically been very hard to sample, thus leaving a gap in the associated knowledge. The processes by which these individuals are dispersed represent a potential mechanism in the connectivity between populations and could help managers forecast future drops in stock abundance. 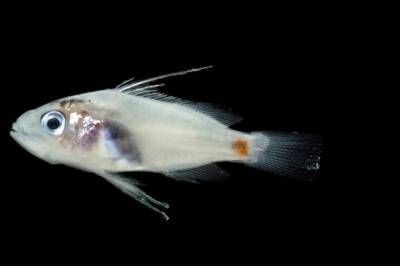 An unidentified individual from Subfamily Epinephilinae. These are your classic groupers. Examples would be Nassau and Goliath Groupers.