Studying the animals in the deep sea within their natural habitat is very difficult. It often requires sophisticated instruments or equipment and scientists have to be careful to make sure that they don’t disturb the animals they are studying. During the DEEPEND cruises, we use sound to study how animals move through the ocean and the daily movement patterns as they go up and down from the surface at night to the deep sea during the day.  Using sonars, we can create a picture of where the animals are by measuring how much sound they reflect. While this gives scientists a broad picture of where the animals are, it does not provide enough detail to look at the individuals within the layers.

During this cruise, we have been using a new tool to study fish and invertebrates down in the depths of the ocean. We have attached an autonomous sonar (WBAT- WideBand Autonomous Transceiver) on to the MOCNESS (see photo above) to look at the animals that are near the net. This new sonar provides much higher resolution data at small scales, kind of like an underwater magnifying glass.  With this new instrument we can look at the individuals that are being collected by the MOCNESS and then compare this back to what we see on the ship’s sonar. So far we have noticed that the animals do not seem to avoid the net as we expected they would. 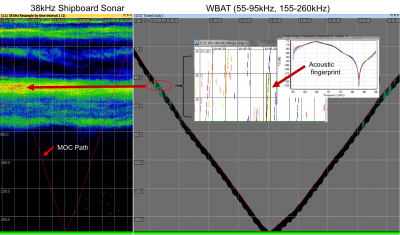