What on earth is a Giant Seed Shrimp? 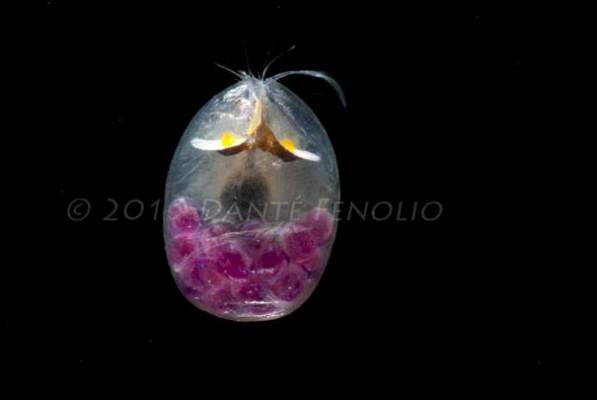 Seed shrimp are crustaceans (related to shrimp, crabs, and lobsters).  They belong to a group known as ostracods.  There are roughly 8,000 extant (living) species.  Ostracods have five paired appendages on their heads and one to three pairs ​of appendages on their bodies.  Another common name for the group is “mussel shrimp” because they have a two part, hinged shell (known as a carapace) that envelopes their bodies…like a clam or a mussel. 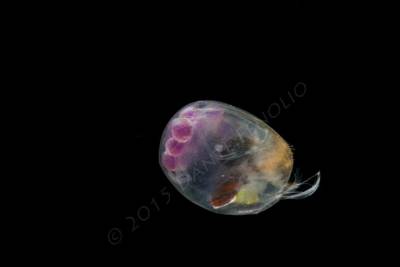 Giant ostracods, Gigantocypris sp., are deep water seed shrimp.  Members of this genus appear to be among the largest of ostracods on earth, reaching a total size of 32mm diameter.  This one was the size of a green pea.  The eyes of these crustaceans (“nauplius eyes”) are divided into two lobes and have reflectors built in.  The eyes can detect bioluminescence from potential prey items, such as is produced by copepods.  Prey items include copepods, mysids, chaetognaths, medusae and other small invertebrates – even very small fish.  Gigantocypris store their eggs internally, in a brood pouch.  The eggs develop there until they hatch (as miniatures of the adults).  Juveniles are released into the pelagic environment.  This individual is brooding purple eggs inside its carapace.  Populations that have been studied are biased with 3 to 6 times more females than males.  Roughly five species have been described inhabiting all of the world’s major oceans.

Last modified on Tuesday, 19 May 2015
Dante Fenolio
Danté Fenolio grew up in the fog-shrouded redwood forests of the Santa Cruz Mountains in California. Banana Slugs, Pacific Giant Salamanders and Red Legged Frogs were a regular part of his daily childhood experience. His father and grandfather were avid outdoorsmen, imparting a love of nature in Danté that remains today. Field work in the tropics began at an early age and evolved into summer months that were spent in the Amazon Basin performing herpetological surveys. Fenolio earned a combined undergraduate degree in Biology and Environmental Studies from the University of California Santa Cruz. He continued on and earned a Masters degree in Zoology from the University of Oklahoma, where he examined the population ecology of the Ozark Blind Cave Salamander. His concurrent involvement with the Subterranean Biodiversity Project gave him the opportunity to work in hundreds of caves across the Ozarks of Oklahoma, Arkansas, and Missouri. Danté then earned a Ph.D. in Biology from the University of Miami, Florida, involving amphibian conservation and taxonomy. After graduate school, Fenolio worked for the Atlanta Botanical Garden, helping to coordinate both local and international conservation efforts and developing captive breeding methods for critically endangered species. Perhaps the most significant project while with the Garden was the development of the Chilean Amphibian Conservation Center, in Santiago, Chile. The collaboration with the National Zoo of Chile works to develop captive assurance colonies of endangered Chilean amphibians and to monitor wild populations for emergent infectious disease – see www.savedarwinsfrogs.org . Danté now runs the Department of Conservation and Research for the San Antonio Zoo (San Antonio, Texas, USA) with active conservation work in the United States, Peru, Brazil, Chile, Costa Rica, China and Japan. Fenolio's research interests focus on the ecology of animals living in challenging environments such as subterranean ecosystems, deep water environments, and forest canopies.
http://www.anotheca.com
Author's recent posts