What Acoustics Can Tell Us; Kevin Boswell

Posted by Heather Judkins on Saturday, 28 July 2018 in News

In the DEEPEND, we apply many techniques to learn about the animals that live in the depths of the twilight zone. One of the types of equipment we use is called an echosounder. While this may sound like a strange instrument, its actually quite common and in fact is on most fishing boats, and often called the ‘fish finder’ or the ‘bottom machine’. We use a similar type of fish finder that is powerful enough to send and receive sound to the depths of the ocean and use the data we collect to study the patterns of the animals in the deep scattering layers (DSLs). In the figure, the daily migration event can be seen with many of the animals within the DSL moving from the depths into the surface at night. Interestingly, not all animals move up at night and some remain at depth and the use of the acoustic devices helps us to better understand how the DSLs change in space and time.

Photo 1:  Output from the echosounder of the DSL layer moving up at dusk

Photo 2:  Examples of collected animals in the MOCNESS that the echospunder attempts to pick up.  Interestingly, squid and octopods don't create a strong enough signal for the     echosounder to pick up. 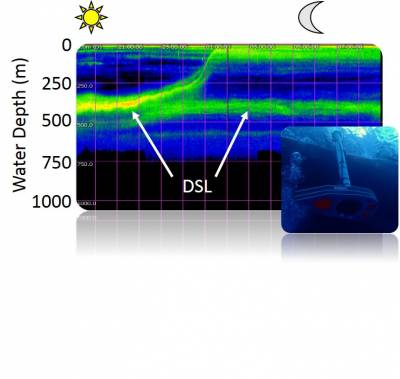 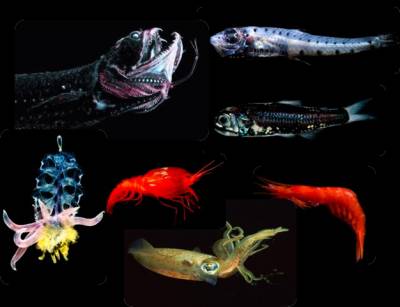 While the echosounder provides important data about the timing, extent and intensity of the migration patterns and the DSL in general, acoustics are limited in their ability to discriminate among species. Because of this limitation, we use net to collect samples to identify the community of organisms which also permits us to describe the diversity of species that we encounter. The mesopelagic community in the Gulf of Mexico is hyperdiverse with greater than 800 species of fishes, crustaceans and other invertebrates.

Indeed, the most prominent piece of equipment that we rely on is the MOCNESS which allows us to collect specimens at through the water column.

The echosounders on the ship provide a picture of large patterns in the ocean so we can learn about the processes that are important at broad scales. However, it is often useful to be able to zoom into the layers and see the individuals that live in those deep areas and to look at them one-on-one. To achieve this, we have attached an autonomous battery-powered echosounder onto the frame of the MOCNESS and added two transducers that collect acoustic data very close to the individuals (~20-40m). By placing the echosounder closer to the animals at depth, we can actually count and measure individuals and learn about their behavior in the dark without the need for any lights. We are learning a tremendous amount from the data we have collected on these animals and are excited to see what tonight’s sampling event shows us!!

Photo:  Echosounder attached to the MOCNESS and output screen of individual animals 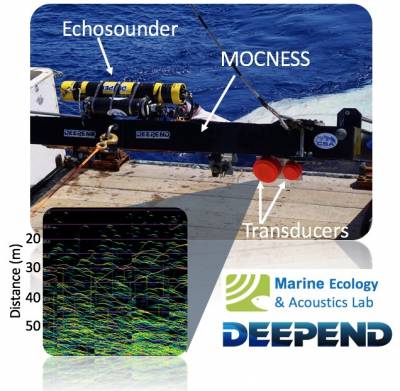