Posted by Chris Valdes on Wednesday, 17 August 2016 in Teachers

Bio-acoustics is a major component to the DEEPEND research.  Whereas the MOCNESS net collects physical organisms, the bio-acoustical team collect sound samples.  They are then able to use that data and transform the auditory world in to a visual one.

“It’s like a fish finder on steroids”, explains Ben from Florida International University, as he describes the system.  He is able to use the data to determine not only biomass, but he is able to identify different species while creating taxonomic data from sound. He is able to send different vertical sound frequencies and pulse lengths through the water to identify individual fish and crustaceans. He is also able to use target areas of interests to get multiple reads in order to create a well-documented profile of the target.  Ben is also able to record migration patterns of different organisms and is hoping to determine why certain patterns exist.

In the early hours of the morning, before the sun has started to rise, a mass migration of pelagic organisms begins its descent to the mesopelagic zone. The cycle reverses itself in the evening, as many crustaceans and fish species migrate back towards the surface to feed through the night. Using multiple frequency scientific echosounders (sonars), scientists can discriminate between taxonomic groups using a technique known as decibel differencing. This is made possible by the unique “acoustic fingerprint,” or echo that each group of organism produces when pinged at different frequencies. In the figure below you can see these taxonomic groups highlighted in different colors, and their corresponding migration pattern recorded over a 24hr period in the Northern Gulf of Mexico.

Although the focus of the trip is to study the deep scattering layer and the diel migration patterns of the organisms that form it, chance sightings of larger fish can occur. In this echogram a school of larger animals were observed swimming through an area of high biomass (brighter color = higher concentration of organisms), which could indicate foraging! (Pictured below) 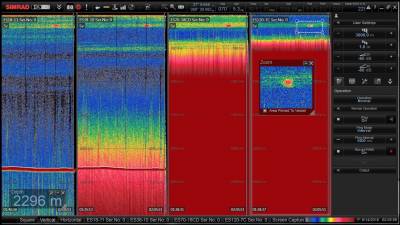