Posted by Chris Valdes on Thursday, 11 August 2016 in Teachers

Today I spent some time on the bridge of the Point Sur and Captain Nic Allen was very generous to show me the ropes.  He helped explain some basic features that are needed for a smooth ride.  He was first to point out the Furuno X band radar which came in handy during the storm that was rolling in.  He was able to make adjustments to the ships course according to the weather system.  He also pointed out that with this machine, he is able to locate other vessels within a18-25-mile range.  Along with the position coordinates of the vessels within that range, the radar is capable of giving great detail about them as well.  He was able to tell me the ships origins and final destination, how many crew were on board, its speed, and the closest distance between it and us if we continued the same trajectory.  This comes in handy because Capt. Allen is constantly walking from one end of the wheel house to the other.  Many times he is checking instrumentation and other times he is overseeing the crew as they manipulate the heavy machinery needed aboard the Point Sur. 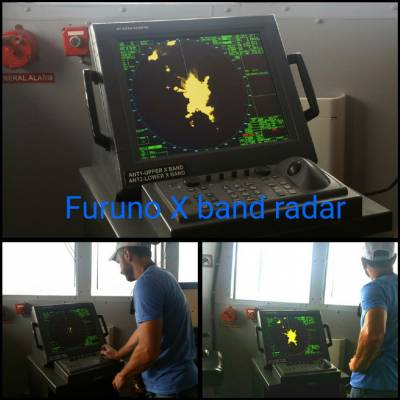 Captain Allen was able to give me a rundown of the ship’s throttle and steering controls.  He said that this ship is easily guided because it is equipped with great electronics and a great crew.  I plan on spending more time with Capt. Allen as the trip continues so he can give me a detailed tour of the ship’s navigational capabilities.

Captain Allen explains the throttle system on the Point Sur. 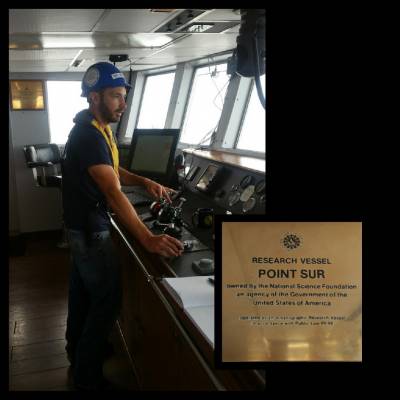 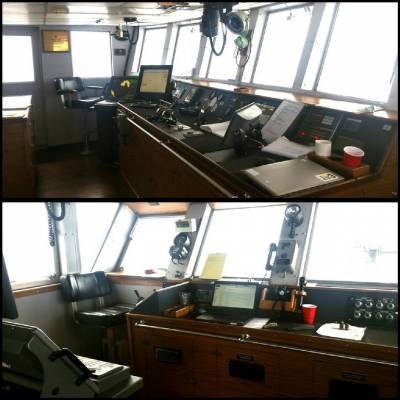