We have had some questions come in about the MOCNESS that we are using to collect our deep-sea animals. “MOCNESS” is an acronym for a Multiple Opening/Closing Net and Environmental Sampling System and it comes in a variety of sizes. The one we are using is called a 10-meter MOCNESS because it samples an area of about 10 square meters. It has a rigid frame and six different nets with codends attached that can be opened and closed at different depths through the touch of a button on the MOC10 operator’s computer. We know the exact depth of the net due to the conducting cable that attaches the MOC10 frame to the ship. This allows information to be sent back to the ship from the many sensors mounted to the frame. In addition to depth, the MOC10 sensors include temperature and conductivity (salinity). The multiple codends allow us to sample within particular depth zones so that we can learn where the organisms live. For example, whalefishes, like the one pictured here, live only below 1000 meters and the lanternfish is only found above 1000 meters. 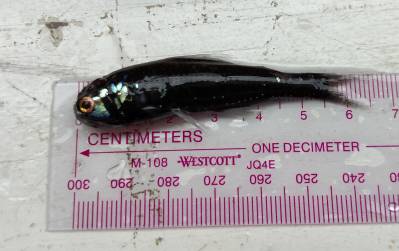 The nets only fish one at a time and are attached to the frame in such a way that as one net closes it opens the next net. The MOC10 is sent down to its max depth of 1500 meters with the first net open which is called an oblique trawl since it samples from the surface to depth. At 1500 meters, a signal is sent through the conducting cable to tell the MOC10 frame to open the next net, which closes the first one. Our sampling plan is to target the following depth layers: 1500-1200 m, 1200-1000 m, 1000-600 m, 600-200 m, and 200 m-surface. Keep an eye out for a later post on the layers of the ocean to find out why!

Last modified on Monday, 04 May 2015
Tagged in: Deepend News