Posted by Chris Valdes on Saturday, 13 August 2016 in Teachers

Laura, a PhD candidate from Florida International University, and Megan a graduate student from NOVA Southeastern University head the crustacean team on DEEPEND 04.  Most people are familiar with shrimp and crabs, but Team Crusty is concerned with much more.  Crabs, lobsters, shrimp, krill, and even mantis shrimp are points of interest. 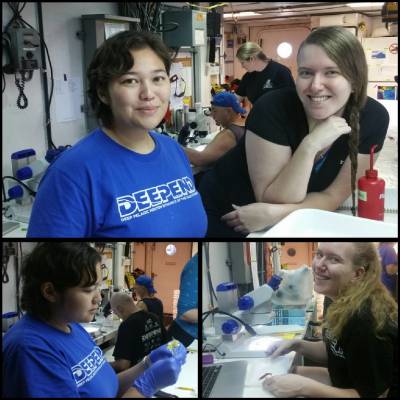 Both Laura and Megan are trying to establish the effects of the Deepwater Horizon oil spill in 2010 on the overall health of the Gulf crustaceans.  After the oil spill, species may have been completely wiped out, but may be supported by other crustaceans migrating from other areas like the Atlantic or Caribbean.

Laura is gathering her last specimens for her study on the crustacean genetic population in the Gulf after the oil spill.  She is trying to collect genetic data that may support that other crustaceans from the Atlantic and/or Caribbean may be migrating to the Gulf. And if so, are they helping to replenish the population that was lost after the oil spill?

Megan is gathering data for her thesis which is focusing on the abundance and diversity of crustaceans.  She is also using that data to compare to the past DEEPEND cruises. She uses morphology rather than genetics to identify her specimens.  Her animal of interest is krill, but is very passionate about Phromina sedentaria (shown below).  This creature lives in this tiny barrel in order to capture its prey and to lay its eggs. 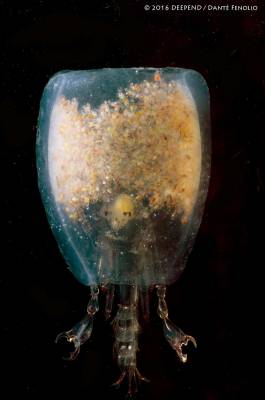 One area of focus that is becoming more predominant are parasites.  Below is a parasite attached to a Benthesicymidae.  This specimen will be sent to the lab for further study. 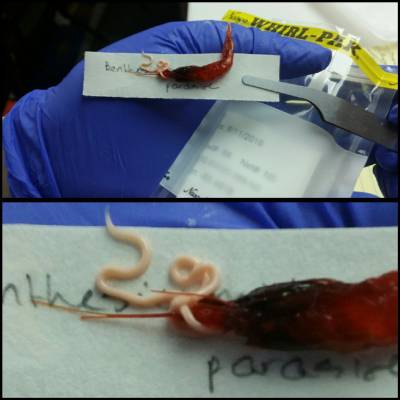 One of the coolest crustacean pulled up was a Cystisoma.  This deep sea, alien looking creature is transparent and are fairly rigged compared to its appearance.  Laura and Megan pointed out that it has 2 large lens on its head to detect light very similar to the way eyes do. 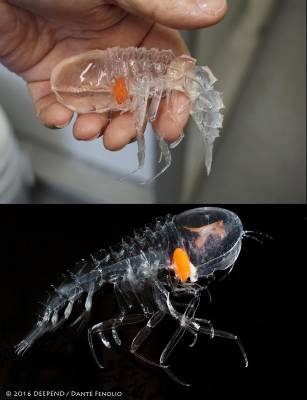 Team Crusty is definitely a joy to work with in the lab, even when they “bother me” for station net tags!