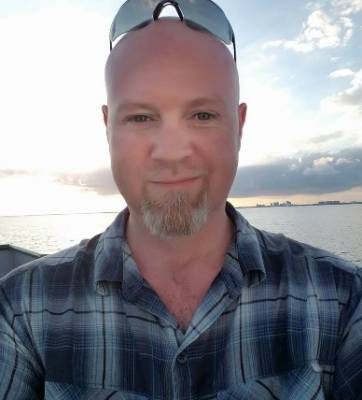 Hello! My name is Richard Hartland, I am currently working on a Master’s degree in marine environmental science at Nova Southeastern University. I am a part of Dr. Tammy Frank’s Deep-Sea Biology laboratory. My thesis is focused on performing a taxonomic and distributional appraisal of the deep-pelagic shrimp genera Sergia and Sergestes of the northern Gulf of Mexico, in the area where the Deepwater Horizon oil spill occurred in 2010. The shrimp I study are important members of the oceanic community, both as consumers of zooplankton and as prey for higher trophic levels (e.g., tunas, mackerel, oceanic dolphins). 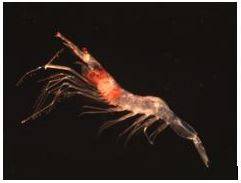 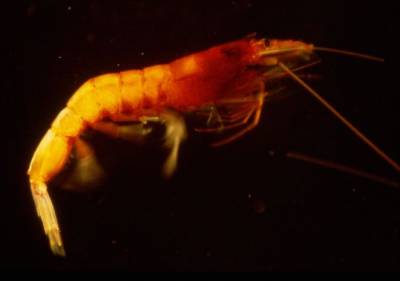 I will be examining the abundance (how many) and biomass (how much they weigh) of the shrimps in the Gulf, and whether or not these values have changed over the years, starting in 2011 (six months after the oil spill) and continuing from 2015, through 2016, and into 2017. The boxplot below shows changes in the patterns of abundance for the most abundant species, Sergia splendens. These data seem to show a sharp decrease in abundance between 2011 and 2015, while slowly increasing in the years to follow. 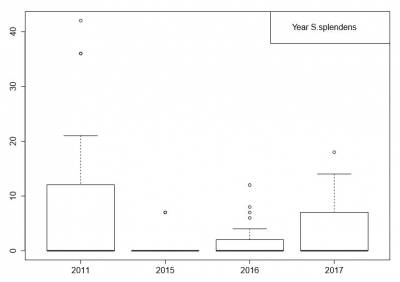 Boxplot of Sergia splendens abundance from 2011 through 2017.

What we are seeing is a reduction in the number of individuals caught from 2011 and 2015, then we see an apparent increase from 2015 to 2016 and into 2017. Although there appears to be a dramatic drop in the abundance from 2011 to 2015, we cannot state that this is due only to the oil spill in 2010, as there are many other reasons the numbers could be different. What we should do is continue to sample in the same areas and monitor how the population changes over time. I am also looking into how these shrimp move up and down the water column during daylight and nighttime hours. This daily vertical migration is one of the many ways that deep-sea organisms are important components of oceanic ecosystems – this movement takes carbon from the near surface (in the form of their food) and transports it deep into the ocean, thus helping mitigate the increases in atmospheric carbon due to the burning of fossil fuels.