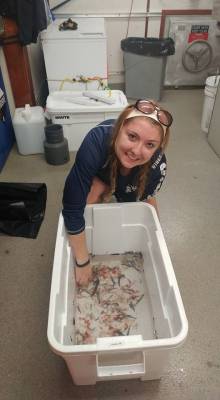 Hello Everyone! My name is Devan Nichols, and I am a master’s student at Nova Southeastern University working in Dr. Tamara Frank’s deep-sea biology laboratory. Our lab specializes in deep-sea crustaceans (aka shrimp!) and my thesis focuses on a particular family of deep sea shrimp known as Oplophoridae. As we all know, shrimp are fairly small organisms in the grand scheme of creatures that live in the deep sea, so why is it important that we study them? Great question! The deep-sea shrimp that I study range in size from 2-20 cm in length. Organisms this small, are perfect prey for larger animals such as deep-sea fish, squid and marine mammals. This means that Oplophoridae make up the base of the food chain, and act as primary producers for many organisms that are higher in the food chain. When the base of the food chain is impacted, even in a small way, it can throw off the balance of an entire ecosystem. These little guys are important! 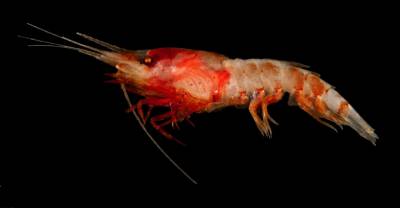 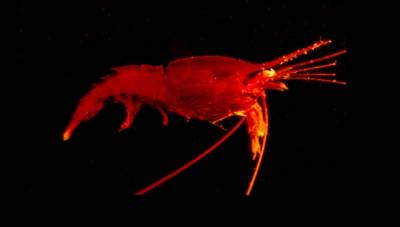 Very little is known about the effects of oil spills on the deep sea. When people think of oil spills what usually comes to mind are the impacts it has on the ocean surface. When these disasters occur, the deep sea is not often thought of. It is kind of an out of sight out of mind situation. The Deepwater Horizon oil Spill (DWHOS) occurred in the Gulf of Mexico on April 20th 2010 releasing an estimated 1,000 barrels of oil per day for a total of 87 days into the Gulf. This oil was released from a wellhead located approximately 1,500 m deep.

My thesis is unique in that I have the opportunity to examine data collected one year after the oil spill (2011) and compare it to data collected five, (2015) six (2016)  and seven (2017) years after the Deepwater Horizon oil spill. I am looking particularly at oplophorid assemblages. This means that I am looking at how the numbers of shrimp may have changed (abundance) and how the weight of shrimp may have changed (biomass) over these sampling years. The boxplot shown below, shows the patterns that I am seeing so far in oplophorid abundance as time goes by. These data seem to show a sharp decrease in abundance in 2011 to subsequent years.

Boxplot of oplophorid abundances during the four sampling years.

Although we cannot attribute any of these changes to the oil spill directly because we do not have a baseline (data from the area collected before the spill), we can still monitor how this oplophorid assemblage has changed over time, and use this information as a baseline to monitor future changes in the Gulf of Mexico. Along with assemblage changes, my thesis will also provide information on whether or not certain species are seasonal reproducers, and if the presence of the Loop Current has any significant effect on oplophorid ecology. The deep sea is a mysterious place, and scientists still have a lot to learn about its complexity and the organisms found there. The picture below shows the net we use to catch these deep sea shrimp, and some of the equipment we use to lower the net into the deep sea! 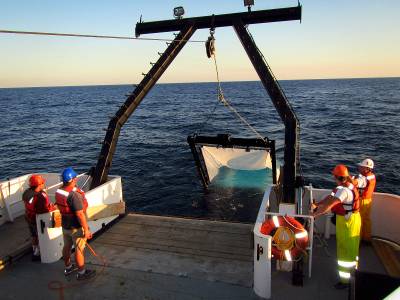 A 10-m2 MOCNESS net being towed behind the RV Point Sur during a DEEPEND cruise.