Master's Monday Blog - Bristlemouth distributions in the Gulf of Mexico 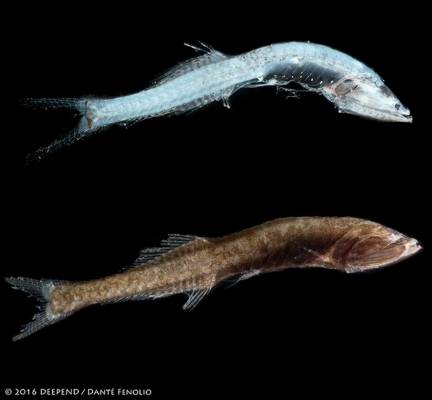 Hello, everyone! My name is Kristian Ramkissoon, and I am a graduate student working in the Oceanic Ecology Lab with Dr. Tracey Sutton. As a member of the lab, I am currently studying the species composition, abundance, and vertical distribution of the deep-sea fish genus Cyclothone, whose combined numbers make it the most abundant vertebrate on the planet. This study of Cyclothone in the Gulf of Mexico is one of the first of its kind. So what are Cyclothone? The name Cyclothone refers to a specific genus of fish which includes a number of different species. They are more commonly known as bristlemouths. Below are some of the more common species that we have collected in the Gulf of Mexico.

Bristlemouths are close relatives of another abundant group of deep-sea fishes, the dragonfishes, and can similarly be found within the meso- and bathypelagic zones of the ocean. Unlike their more infamous cousins, however, Cyclothone are much smaller in size and much less active (many of the Cyclothone we encounter on our cruises are hardly an inch long!) 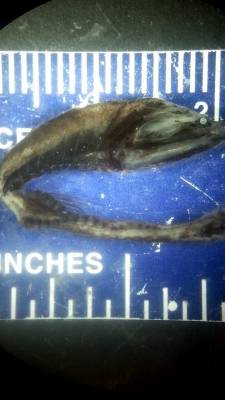 Cyclothone pallida against a ruler and under the microscope.

Collectively, these fishes have a near-ubiquitous distribution, with various species found throughout the world’s oceans. This worldwide presence, along with their status as the most abundant known vertebrate, make understanding Cyclothone important for understanding the ecology of the deep sea. As a part of my research into the world of bristlemouths, I spent a lot of time learning the unique features that distinguish each species from one another. Some of the common traits that I used to distinguish between different Cyclothone species were skin color, tooth shape, and gill morphology. To date we have identified thousands of individual Cyclothone down to the species level, keeping close counts and measures of each! 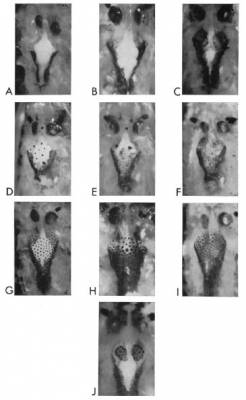 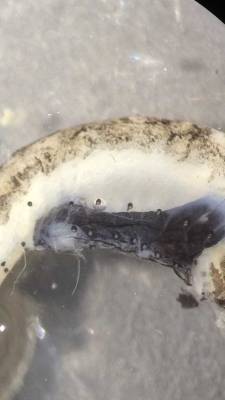 So far, my research has revealed quite a few interesting things about these tiny denizens of the deep! For one, we have confirmed that Cyclothone in the Gulf of Mexico, similarly to those elsewhere in the world, do not vertically migrate. Additionally, the taxonomic data collected, in combination with data from the MOCNESS (Multiple Opening Closing Net and Environmental Sensing System) seem to suggest that all six species commonly found within the first 1500 meters of the northern Gulf of Mexico occupy relatively tight and distinct depth ranges. This information tells us that Cyclothone, unlike many other deep-living predators who migrate daily, may subsist entirely on what is found at their respective depth ranges (in the deep, this can be very little!). In addition, we are attempting to assess the impact that hydrographic features such as the Loop Current and eddies formed by it may have on the distribution of Cyclothone within the Gulf of Mexico.