Master's Monday Blog - Benthesicymid shrimp of the Gulf of Mexico 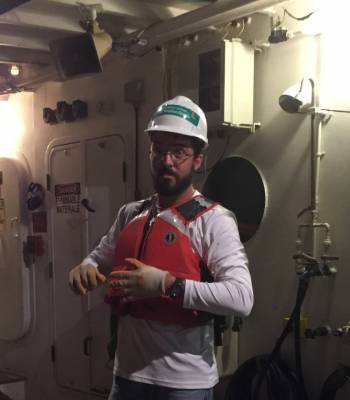 My name is Ronald Sieber. I am a Master’s student at Nova Southeastern University working under Dr. Tamara Frank in the Deep Sea Biology Lab. I work with Dr. Frank as a graduate research assistant studying deep sea shrimp in the northern Gulf of Mexico. My work pertains to the general distribution and abundance of the deep sea shrimp family Benthesicymidae.

The family Benthesicymidae consists of 39 species across five genera, the most speciose of which are Gennadas (16 species) and Benthesicymus (15 species). Thus far we have collected two genera (Gennadas and Bentheogennema) consisting of six species. While the family in general can be identified by a blade-like rostrum and a bearded appearance due to the presence of setae tufts, the individual species can only be identified by the shape and structure of the genitalia. The structures are known as petasma (for males) and thylecum (for females). 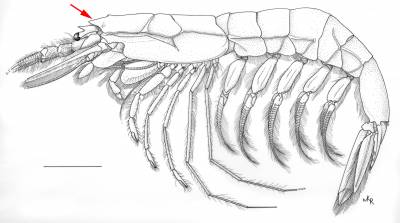 Image of Bentheogennema intermedia displaying the truncate and blade-like rostrum typical of all members of the family Benthesicymidae. Adapted from Orrell and Hollowell, 2017.

Petasma (a) and thylecum (b) for Gennadas bouvieri adapted from (Kensley 1971) and Bentheogennema intermedia from (Perez Farfante and Kensley 1997). Petasmas are composed of three variously shaped lobes while thyleca are composed of various processes and flaps on the 6th, 7th, and 8th sternites that are species specific and easily identifiable.

This study is trying to establish a broader understanding of the Benthesicymidae assemblage in this region of the Gulf of Mexico. It will also look into potential abundance shifts for the individual species to see if there have been any increases or decreases in quantity over the seven years that samples have been collected. Also, this study is looking into the potential impact that the Loop Current poses to the vertical migration of the Benthesicymidae. This current, which is sporadically present in the region of study, causes an abrupt shift in water temperature that is unfavorable for these shrimp. While initial results show an impact in abundance due to Loop Current presence, further statistical analyses are required to show the potential migration shifts that the current poses.