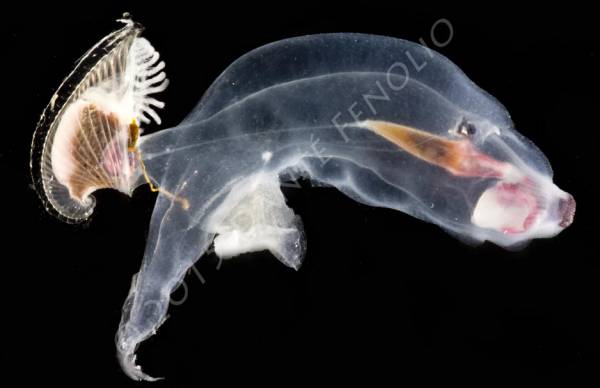 I am out here on the R/V Point Sur primarily to study cephalopods, the squids, octopods and their relatives. However, I have decided to write about a different group of very interesting animals. The swimming snails called heteropods are a group about which most people know nothing and nobody knows much. They are not closely related to the other, and somewhat better known, group of snails that spend their entire lives in the pelagic environment, the pteropods.

Heteropods are active visual predators and, although most are small (planktonic), some can get quite large -- up to a half meter in length. I studied them many years ago and am now becoming reacquainted because we have been catching them regularly in our samples from the upper water layers. Three families exist, which seem to show a progression of evolution into pelagic life. Animals in the family with the smallest animals but most species have a coiled transparent shell into which they can withdraw their body and seal it off with a standard snail trap door, called an operculum. The shell has a keel on it, similar to what you might see on the bottom of a sailboat. The second family gets much larger but still has a keeled shell; for most species in this family the shell covers the guts like a hat. The third family loses the shell during transformation from the larval stage. They are streamlined and can swim quite fast. They should definitely be considered nekton rather than zooplankton.

All heteropods have well developed, but peculiar, eyes. They have a narrow retina that the can rotate up and down. They probably form an image much the same way that the image forms on a TV screen, aggregating one line after another rather than the whole picture forming at once. Another characteristic of all heteropods is a single fin on the belly. They normally swim by undulating this fin. Additionally, the larger species can swim in rapid bursts by eel-like undulation of the entire body, which is shaped somewhat like a fish including a flattened tail. The bodies, especially in the larger species, are remarkably transparent except for the eyes (which have to catch light), the guts, and the organs of the mouth. Often when we are sorting our catch, the only way you can tell that there is a large heteropod is by the eyes, guts, and mouth.

The mouth, located at the end of a trunk-like proboscis, has a structure characteristic of snails and most other molluscs, a tooth-covered tongue called a radula. This is used to grab and tear the heteropod's prey. The proboscis is why these animals are sometimes called "sea elephants". What they eat varies among the three families. The small species in the fully shelled family eat other snails, especially pteropods. They have a sucker at the base of the fin and use it to hold the shell of their prey. Not much is known about the natural prey of the other two families. It has been proposed that they eat a variety of prey, ranging from jellyfish to arrow worms, perhaps even including small fishes. Incidentally, the sucker is reduced in the other families and seems to be used to hold a sexual pair together during mating, so that the male can transfer a packet of sperm (spermatophore) to the female.

We are finding that these active predatory snails are quite common out here, It will be interesting to figure out their importance in the pelagic ecosystem of the open Gulf of Mexico. 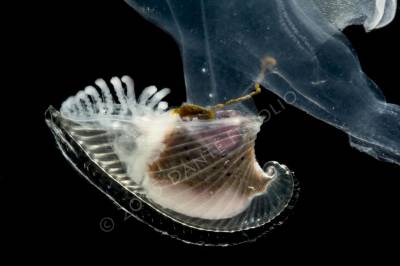 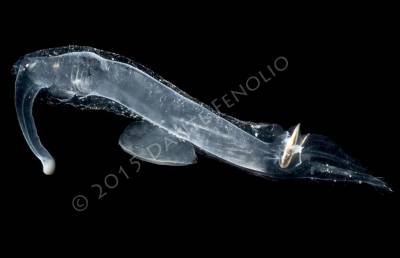 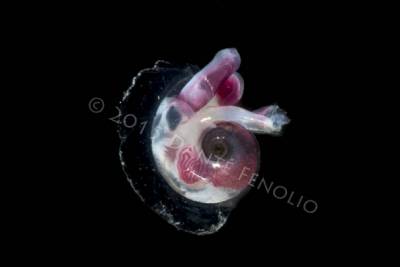 Last modified on Wednesday, 27 May 2015
Dante Fenolio
Danté Fenolio grew up in the fog-shrouded redwood forests of the Santa Cruz Mountains in California. Banana Slugs, Pacific Giant Salamanders and Red Legged Frogs were a regular part of his daily childhood experience. His father and grandfather were avid outdoorsmen, imparting a love of nature in Danté that remains today. Field work in the tropics began at an early age and evolved into summer months that were spent in the Amazon Basin performing herpetological surveys. Fenolio earned a combined undergraduate degree in Biology and Environmental Studies from the University of California Santa Cruz. He continued on and earned a Masters degree in Zoology from the University of Oklahoma, where he examined the population ecology of the Ozark Blind Cave Salamander. His concurrent involvement with the Subterranean Biodiversity Project gave him the opportunity to work in hundreds of caves across the Ozarks of Oklahoma, Arkansas, and Missouri. Danté then earned a Ph.D. in Biology from the University of Miami, Florida, involving amphibian conservation and taxonomy. After graduate school, Fenolio worked for the Atlanta Botanical Garden, helping to coordinate both local and international conservation efforts and developing captive breeding methods for critically endangered species. Perhaps the most significant project while with the Garden was the development of the Chilean Amphibian Conservation Center, in Santiago, Chile. The collaboration with the National Zoo of Chile works to develop captive assurance colonies of endangered Chilean amphibians and to monitor wild populations for emergent infectious disease – see www.savedarwinsfrogs.org . Danté now runs the Department of Conservation and Research for the San Antonio Zoo (San Antonio, Texas, USA) with active conservation work in the United States, Peru, Brazil, Chile, Costa Rica, China and Japan. Fenolio's research interests focus on the ecology of animals living in challenging environments such as subterranean ecosystems, deep water environments, and forest canopies.
http://www.anotheca.com
Author's recent posts