From the rooter to the tooter- the hunt for a home

Posted by Heather Judkins on Monday, 01 August 2022 in News

Sea cucumbers are echinoderms – related to starfishes and sea urchins.  Sea cucumbers have an interesting body plan that includes something known as a “respiratory tree.”  The respiratory trees are highly branched systems (two per animal on either side of the sea cucumber) that take water in and out through a cloacal pore.  The flow of water is used in respiration.  Now consider the “pearlfish.”  These fishes are a moderately diverse assemblage – but they have one thing in common… they inhabit the digestive tract of sea cucumbers.  They use the water flow going in and out of the sea cucumber to locate the cloaca… then they swim right in.  Often times these fishes live alone but sometimes, a pair will live together within the same sea cucumber.  One group of pearlfishes harm their host by consuming their gonads and other internal organs – a truly parasitic relationship.  But with the rest of the pearlfishes, the fishes do not do any harm while the sea cucumber serves as a home base. 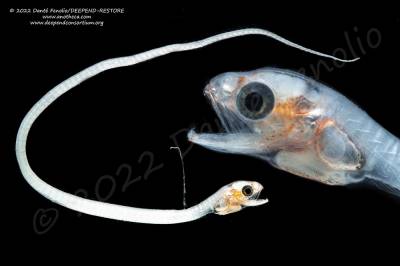 Pearlfish collected on DP08 in the Gulf of Mexico (Photo:  D. Fenolio)

The "Tongue Eating Isopods" are a group of isopod crustaceans that inhabit the mouths of fishes as adults. This "Tongue Eater" is of the family Cymothoidae and is of the genus Cymothoa. Ispods of this genus all start life as males. If they are lucky enough to find their way into the mouth of a fish (lots of larvae in the water column - perhaps larvae grab onto small fish and move into a larger fish when the small one is eaten?). Once they do get into the mouth of a fish, they latch onto the tongue with sharp grasping legs. They tighten their grip of the tongue and cut circulation. Ultimately, the tongue rots away except for a stub at the floor of the mouth. The isopod will spend the rest of its life living in the space where the tongue of the fish was and holding onto the "tongue stub." Presumably, the isopod helps itself to bits and pieces of food as the fish eats. We found this individual within the remains of a large flying fish that was itself in the gut of a Mahi Mahi (Coryphaena hippurus). We assume the isopod had replaced the tongue of the flying fish. The dorsal aspect is to the left, the ventral aspect to the right. If you look under the ventral aspect, you can see a pouch (a "marsupium") where this female had been brooding a clutch of developing young. All of these isopods start life as males. If they find a fish host and replace the tongue, they change to the female sex. Newly arrived males to a fish mouth will mate with the resident female - yes, in the mouth of the host fish or on the gill arches. Males typically inhabit the gill arches of the fish. Some sources argue that all isopods enter the fish through the gills, not the mouth. Observed on the Gulf of Mexico, July 2022 during DEEPEND-RESTORE work. 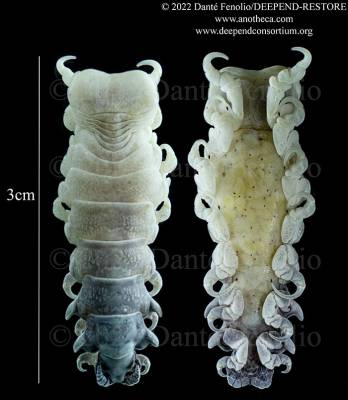