Flying high with the DEEPEND team

Posted by Heather Judkins on Wednesday, 03 August 2022 in News

While this DEEPEND RESTORE project is focused on deep-sea animals, we are also exploring linkages between those deep-sea animals and other marine life out in the ocean. One of those links is with the oceanic bird fauna. Some oceanic birds (petrels and storm-petrels) are known to feed on the mesopelagic fishes and squids that migrate to the surface at night.

A ship out at sea is like a moving island in the ocean. Especially when storms occur, various birds may seek refuge on ships or are attracted to the lights of the ship at night. During a thunderstorm yesterday, we had two Cliff Swallows visit the ship. So, we are doing observations, when possible, to see what birds are visible from the ship.

The first thing we noticed is that we have a few hitchhikers that have decided to stay on the vessel as a convenient place to rest and launch feeding excursions into the surrounding waters. A juvenile Brown Booby and a juvenile White Ibis have each taken residence on the ship. The ibis is wandering around the decks and poking around in various holes and crevices. The booby perches on the ship’s anchor and is sometimes joined by other brown boobies (at least one other juvenile and 2 adults over the past week). A Masked Booby has perched on the bow a couple of times. When the ship disturbs a group of flying fishes, these boobies launch themselves quickly and swoop down to catch those flying fishes while they are gliding over the water.

Other birds we have seen this past week include Royal Terns, Sandwich Terns, Laughing Gulls, Magnificent Frigates, Leach’s Storm Petrels, and Audubon’s Shearwater. 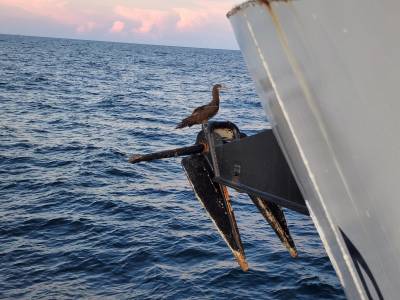 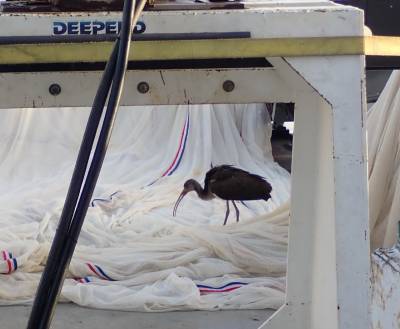 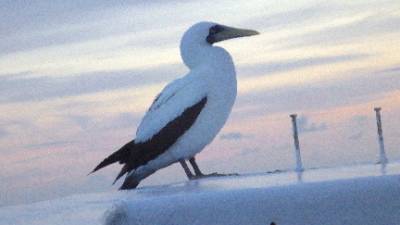 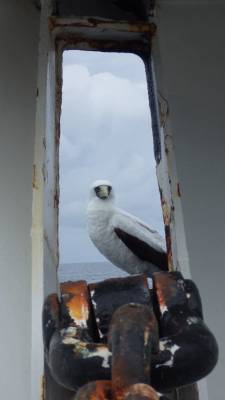