Blazing Seven back in action!!

Posted by April Cook on Saturday, 06 June 2015 in Scientists 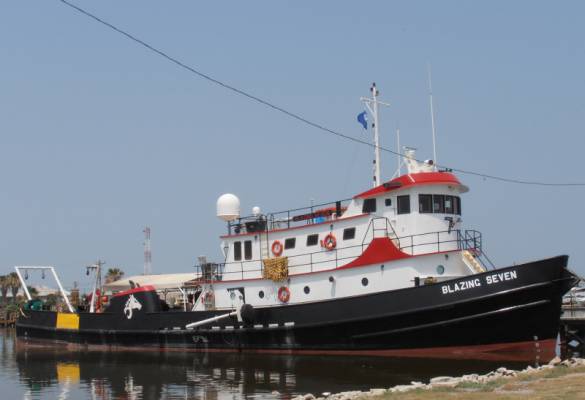 After a few delays and a change in available crew, the Blazing Seven is back in action! I am unfortunately not out there with them, but I will be posting blogs and updates on the cruise tracker for them. Jeff Plumlee, a researcher from Texas A&M Galveston, will be sending us updates from sea. Unfortunately, they will not be able to send pictures or videos during the cruise, but we will post some in our picture gallery after they get back. Here is the first blog from the Blazing Seven!

Howdy from the Blazing Seven!
This morning, at approximately 0700 hours, The Blazing Seven left from Port Fourchon, LA with six Texas A&M at Galveston student researchers, and four Blazing Seven crew members, to begin our first Ichthyoplankton cruise looking for billfish and other pelagic fish larvae. This research team is conducting this survey as part of the GOMRI initiative as members of the DEEPEND Consortium to study pelagic fish ecology and trophic connectivity. This is our second attempt at the cruise after being stalled on June 1st due to a mechanical malfunction, but after some repairs, we're back! Today was designated primarily as a travel day, as it will take us about 20 hours to arrive at our first site, but we were still able to start collecting data.
Dr. Kevin Boswell and his Research Technician Adam Zenone, of Florida International University, have equipped the Blazing Seven with three separate SONAR transducers that they will use to monitor the DSL (deep scattering layer). The DSL is a layer of fish and zooplankton that gather at between 300 and 500 m depth during the day, and within the top 200 m at night. This mass aggregation of fishes can cause an anomaly in SONAR estimates of depth, due to the sound bouncing off of the many fishes' swim bladders, and represents a very large amount of biomass in the open ocean. Dr. Boswell will use the information gathered on the cruise to observe the intricacies of the DSL, as well as the diel vertical migration of fishes and zooplankton, and use these techniques to better understand the ecology of deepwater ecosystems.
Today we were able to deploy these three transducers as well as calibrate them for our six-day cruise throughout the Gulf collecting several cycles of the movement of the DSL. We also were able to get our first glimpse of pelagic fishes! Jacks, Tuna, Mahi, and Flying Fish galore, along with a very curious Silky Shark that was attracted to the calibration device we used for the SONAR transducers.
Tomorrow morning we start very early with our first nighttime deep water tow using a ring net at 500m. So make sure to stay tuned for what we find!