My name is Jon Moore and I am a professor of biology at Florida Atlantic University’s Wilkes Honors College. While I serve as a fish biologist for the DEEPEND project during this cruise, I have always had an interest in other wildlife and I was recently asked to keep records of sightings of various oceanic birds during this cruise. This data may help bird biologists and conservationists understand more about what birds are doing far offshore, where there are fewer observers to keep track of things.

We are working in an area beyond the continental shelf, roughly 140 miles south of Gulfport Mississippi, where our voyage started from. Out here in the blue waters of the open ocean, there are several different groups of birds that you might encounter: truly oceanic birds that rarely come to shore (petrels, shearwaters, storm petrels, jaegers, etc.); coastal shore birds (gulls, terns, sandpipers, pelicans, etc.); and land birds that may be migrating over the ocean or are blown offshore by costal storms (songbirds, herons, hawks, etc.).

Sailors and ornithologists (bird biologists) have noted for more than a hundred years that migratory and wayward land birds will often land for a period of time on ships out at sea. You can think of ships as moving islands that may give birds a place to rest, sleep, and possibly feed or drink freshwater.

Some of the more open ocean birds we saw included Pomarine Jaegers, Sandwich Terns, Magnificent Frigatebirds, and Brown Boobies. Some surprising land birds we saw during this cruise were American Redstart and Common Yellowthroat wood warblers, a Shiny Cowbird, a Yellow-billed Cuckoo, flocks of Barn Swallows, and a hummingbird that zoomed by us before we could identify the species. 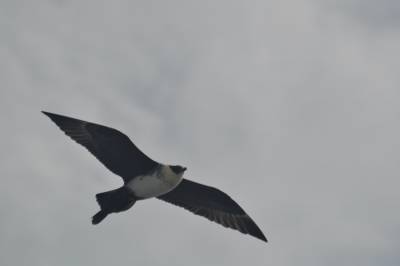 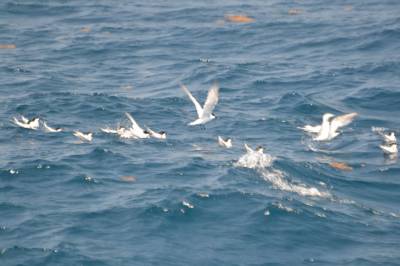 Sandwich Terns, comfortable both along the shoreline and far out at sea (photo by Jon Moore). 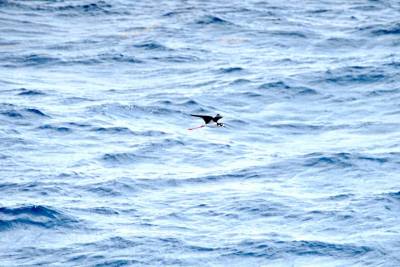 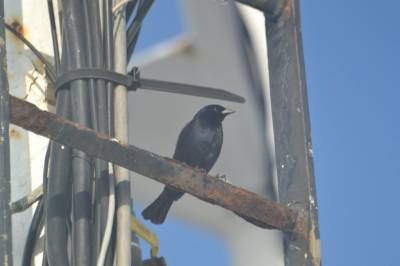 Black-necked stilt, a wading shorebird, seen during this cruise (Photo by Casey Hurt)

A Shiny Cowbird typically found on Peninsular Florida, Cuba, and other Islands of the Caribbean (photo by Jon Moore). 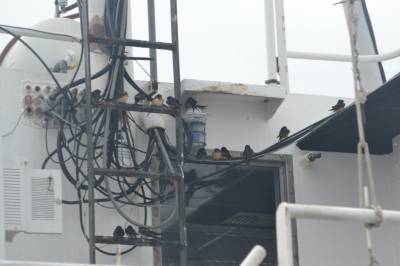 A flock of Barn Swallows resting on the ship’s bridge (photo by Jon Moore).