And Away We Go!

Posted by Heather Judkins on Thursday, 19 July 2018 in News

Hi everyone, after checking to make sure all gear, crew, and science team were onboard the R/V Point Sur, we left the dock just after midnight and we have arrived at our first station! Today, the team spent time calibrating the multibeam sonar and putting the nets onto the MOCNESS frame.  You will hear more soon from the acoustics team about the sonar and I will describe the MOCNESS for you now. 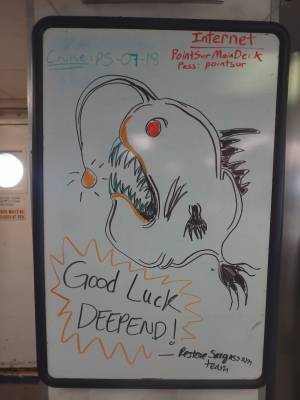 MOCNESS is an acronym for a Multiple Opening and Closing Net and Environmental Sensing System, which will deploy six nets in the water from the surface down to 1500m (~4500 ft).  One net at a time opens at a specified depth (1200-1500m, 1000-1200m, 600-1000m, 200-600m, 0-200m), and net 1 which stays open as the whole system goes down to 1500m.  At each depth, a net is open for 45 minutes, moving through the water and collects organisms in the cod end (container at end of each net).  The whole thing is brought back onto the deck where the science team then processes the collections.  We spent a couple of hours today setting up the MOCNESS nets and cod ends in a light rain and we are now ready for our first deployment which is tonight! 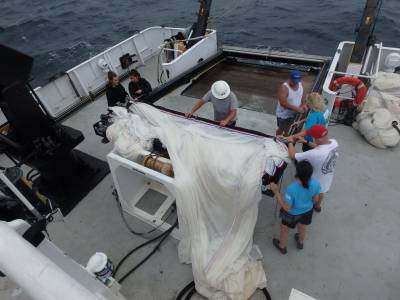 Assembling the nets is a team effort 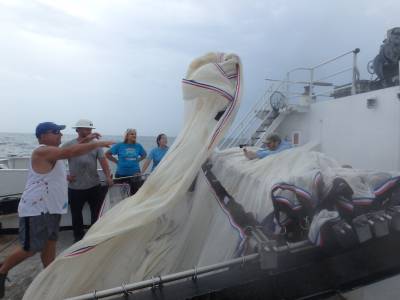 This trawl we are doing tonight is the 100th trawl of the DEEPEND cruises.  What an accomplishment!  The nets will go down at 9pm and we will be ready to sort through the samples at 3am when processing begins.

Stay tuned for how the 100th trawl goes!