A Dozen Years Since the Big Spill

Posted by Heather Judkins on Friday, 05 August 2022 in News

When the BP Deepwater Horizon oil spill happened more than a dozen years ago the thought of so much oil impacting the deep sea had not been considered thoroughly enough to fully comprehend the impacts. With the depth of the release nearly a mile below the surface, the high pressure of the release and the application of dispersants at the well head, a large portion of the oil remained trapped in the deep sea. As the strategy advisor for the offshore water column injury assessment, I worked with an incredible team of biologists, modelers, project managers, and more to develop a sampling plan to investigate the impacts of the oil spill on the waters of the Gulf of Mexico and the animals that inhabit them. Dozens of offshore sampling missions were part of the investigation and one of the main goals was simply to document what was in the deep waters of the Gulf. We had limited understanding of the diversity, distribution and abundance of the deep sea animals.

Fast forward a dozen years and I am finally offshore in the Gulf of Mexico seeing these animals on board the ship as they come up from the depths. While looking at pictures is great, there is something extra special about seeing the animals first hand. Looking at teeth, scales, spines, eyes, and photophores under a microscope shows just how beautiful and amazing these animals are. Because of the lack of light where these animals live, many are black, red (red light doesn’t penetrate very deep into the sea), or clear. Clear animals always amaze me.

Now for a quick comparison of how I identify with a couple of the animals that I had the privilege of being able to observe as they were brought up from the depths of the Gulf of Mexico:

The Angler has a lure attached to its body to attract its prey. While I don’t have a lure attached, I once spent a year fishing only with flies that I tied from my own mustache hair.

The Swallower eats big meals. Since I typically don’t eat breakfast, and have been known to skip lunch too, with three great meals a day on board the ship, I feel a bit like a Swallower. 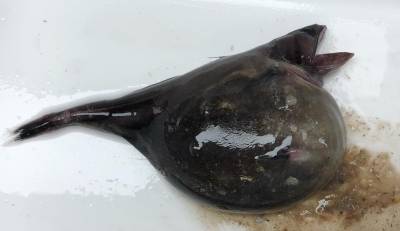 I feel like a Swallower after three big meals a day! (Photo: D. Hahn)

While we certainly hope that we don’t have another major spill like the Deepwater Horizon, there is always a chance. Additionally, there have been several smaller spills that have occurred in the depths of the Gulf in the last decade. In order to understand how these deep-water spills impact this incredibly diverse assemblage of fish and invertebrates, long term investigations such as this DEEPEND RESTORE project are crucial.