Partially funded by a $15-million grant from the National Institute of Standards and Technology, the Center of Excellence is the only facility in the country dedicated to the study, research, and preservation of coral reefs. It was completed in September 2012.

College of Marine Science, University of South Florida
The University of South Florida’s College of Marine Science (CMS) conducts interdisciplinary research and education to further the understanding of marine environments.  It emphasizes research and education in biological, chemical, geological, and physical oceanography; incorporating technology development as well as community service and collaboration.  Its research efforts strive to be both regionally relevant and globally significant. 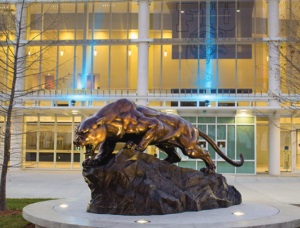 Florida International University (FIU) is a multi-campus public research university offering a broad array of undergraduate, graduate, and professional programs. The university has two main campuses: the 344-acre Modesto A. Maidique campus in western Miami-Dade County and the 200-acre Biscayne Bay Campus in northeast Miami-Dade County. Through 12 colleges and schools, FIU offers more than 200 bachelor, master, and doctoral degree programs and conducts basic and applied research. Interdisciplinary centers and institutes conduct collaborative research to seek innovative solutions to economic, technological, and social problems. Annual research expenditures exceed $100 million. The Carnegie Foundation for the Advancement of Teaching classifies FIU as a Research University/High Research Activity. With nearly 53,000 students, 1,100 full-time instructional faculty, and over 11,000 degrees awarded annually, FIU is the largest university in South Florida. Ninety-seven percent of FIU’s full-time tenured or tenure-track instructional faculty hold doctorates or the highest degrees attainable in their fields. FIU is the only urban public university in the state to be a member of Phi Beta Kappa, the nation’s oldest scholarly honorary society.

Texas A&M University at Galveston is a special-purpose institution of higher education for undergraduate and graduate instruction in marine and maritime studies in science, engineering and business. The institution is under the management and control of the Board of Regents of The Texas A&M University System, with degrees offered under the name and authority of Texas A&M University at College Station.  The Ocean and Coastal Studies Building (OCSB) houses the university’s marine biology and marine sciences programs. Opened in July 2010, it is a research and teaching facility housing about 40 faculty researchers and over 100 graduate students

The University of South Florida St. Petersburg (USFSP) is a separately accredited, research-active institution within the USF System. It offers 24 undergraduate and 13 graduate programs in three colleges: Arts and Sciences, Business, and Education. The university has earned numerous recognitions and accreditations, including AACSB International, NCATE, ACEJMC and U.S. News & World Report rankings. USFSP is recognized for its significant commitment to community involvement and civic engagement by the Carnegie Foundation for the Advancement of Teaching.

USFSP is Pinellas County's only residential public research institution, and home to a distinguished faculty who are engaged in the shared goal of student success. It serves as an anchor for St. Petersburg’s culture and arts corridor, and premier medical facilities, offering rich educational programs that draw on the strengths of both.

The National Systematics Laboratory conducts research on the systematics of marine organisms of economic and ecological value to the US. Scientific studies conducted by NSL personnel contribute to the study of marine biodiversity by describing and naming new species, as well as revising existing descriptions, names, and evolutionary systematic relationships based on new information. This information provides a basis for the understanding of the diversity of marine communities and benefits the Nation by providing a basis for proper management of our Nation's living marine resources.

Our research produces two principal products: 1) worldwide and regional taxonomic monographs, which are scholarly documents that identify, describe, and catalogue the diversity of marine organisms with commercial or ecological importance; and 2) various aids to identification, including taxonomic keys and descriptions of new species and of the development of known species. These documents provide the information necessary for non-specialists to recognize and to identify marine organisms. The NSL is currently studying the taxonomy and diversity of fishes, crustaceans, cephalopods, cnidarians, and sponges.

We have a permanent staff of five scientists and three support staff. In addition, we sponsor visiting investigators and mentor post-doctoral fellows, graduate students, and student interns. Because the NSL is located in the National Museum of Natural History, we have access to some of the world's richest collections, libraries, equipment, and facilities designed specifically for taxonomic and systematic research. The opportunity to work with other taxonomic experts at the Smithsonian Institution enhances our capabilities to use the latest ideas and techniques in the field. As Smithsonian Adjunct Scientists, NSL scientists expand the scientific expertise of the Smithsonian Institution and help build and curate the national collections.

America’s Best & Top 10 lists the San Antonio Zoo as one of the top 10 best zoos in the U.S., noted for having one of the largest bird collections in the world and its historical significance of having opened two of the first cageless exhibits in America back in 1929.

The San Antonio Zoo is a non-profit organization operated by the San Antonio Zoological Society with a core mission of providing the highest standard of care for its denizens while offering visitors an opportunity to learn about the astonishing animals, flora and fauna that inhabit this planet. The park is a captivating 52-acre home to over 9,000 animals from 750 different species and sits in an old limestone quarry basin, which serves as a natural backdrop for much of the Zoo.

Protecting endangered species and educating visitors to the park has always been a priority of the San Antonio Zoo. Without education and exposure to such regal creatures as the Asian elephant and clouded leopard, future generations will lack the compassion and understanding that is crucial to these creatures’ continued survival. The San Antonio Zoo is involved with a whopping 230 endangered species programs and plays a key role in breeding endangered animals worldwide. Conservation of animals indigenous to Texas has always been of paramount importance. In the 1990’s, for example, the Zoo partnered with the Texas Parks & Wildlife to support the endangered Attwater’s prairie chicken.